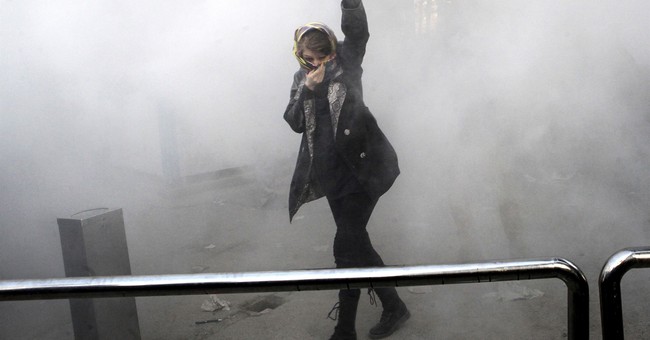 As the Iranian regime continues brutal crackdowns on protestors in cities across the country, the White House is again expressing support for those on the ground raising their voices.

"The Trump Administration is deeply concerned by reports that the Iranian regime has imprisoned thousands of ?Iranian citizens in the past week for engaging in peaceful protests.  Further reports that the regime has tortured or killed some of these demonstrators while in detention are even more disturbing.  We will not remain silent as the Iranian dictatorship represses the basic rights of its citizens and will hold Iran’s leaders accountable for any violations," White House Press Secretary Sarah Sanders released in a statement Wednesday. "The protesters in Iran are expressing legitimate grievances, including demanding an end to their government's oppression, corruption, and waste of national resources on military adventurism.  Iran's regime claims to support democracy, but when its own people express their aspirations for better lives and an end to injustice, it once again shows its true brutal nature.  ?The United States calls for the immediate release of all political prisoners in Iran, including the victims of the most recent crackdown."

The statement comes after news the administration plans to continue easing sanctions on the Iranian government (with new conditions) and as a deadline looms on a recertification of the Iranian nuclear agreement.

President Donald Trump is expected this week to extend relief from economic sanctions to Iran as part of the nuclear deal, citing progress in amending U.S. legislation that governs Washington’s participation in the landmark accord, according to U.S. officials and others familiar with the administration’s deliberations.

But Trump is likely to pair his decision to renew the concessions to Tehran with new, targeted sanctions on Iranian businesses and people, the six people briefed on the matter said. The restrictions could hit some firms and individuals whose sanctions were scrapped under the 2015 nuclear agreement, a decision that could test Tehran’s willingness to abide by its side of the bargain.