Nancy Pelosi Has Been Enabling Sexual Predators For Decades 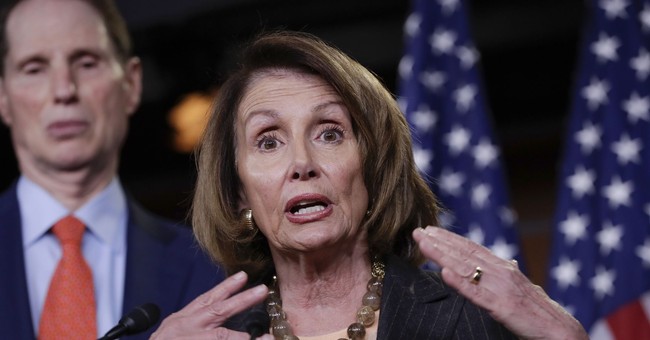 As Guy has thoroughly exposed, over the weekend House Minority Leader Nancy Pelosi defended Congressman John Conyers as an "icon" amid allegations he fired a woman on his staff after she refused to give him sexual favors.

.@NancyPelosi: Accused Congressman Conyers is an "icon" in our country. #MTP pic.twitter.com/4QlKKJTIJP

Over at Vox, Pelosi is being called out as the ultimate enabler of sexual harassers and abusers. "That woman." She'll also being held accountable as part of the reason why women don't come forward more often when they are victims of sexual misconduct.

But that's exactly what Pelosi is: That woman, a faux feminist who has been enabling sexual predators for decades.

We can start with her full throated defense of former President Bill Clinton. She's been defending his documented and repetitive bad behavior since the 1990s and did so again on Meet The Press Sunday.

During her time as Speaker of the House, Pelosi ignored disgraceful sexual harassment by former Congressman and San Diego Mayor Bob Filner. During his time as Chairman of the Veterans Affairs Committee, Filner sexually harassed female veterans who were victims of rape during their time in the military. He knew about their vulnerable positions and took advantage of them. He offered them "help" in return for dinner dates. A total disgrace and gross abuse of power.

Filner's record as an advocate for veterans, and female veterans in particular, make the latest developments in the charges of sexual harassment against him that much more deplorable.

Three more women this week -- two survivors of military sexual assault and a nurse who cared for a female veteran -- came forward with allegations that they were sexually harassed by the San Diego mayor and former 10-term congressman.

Nurse Michelle Tyler on Tuesday charged that she approached Filner in June to ask for assistance dealing with the Veterans Affairs Department on behalf of her patient Katherine Ragazzino, an Iraq war veteran. Filner "made it very clear to me that his expectation was that his help for Katherine depended on my willingness to go to dinner with him, spend personal time with him and be seen in public with him," Tyler said, with high-profile attorney Gloria Allred at her side.

Two other women, meanwhile -- Air Force veteran Eldonna Fernandez and Army veteran Gerri Tindley -- also came forward with stories of unwanted advances from Filner. Both Fernandez and Tindley are survivors of sexual assault in the military and members of the National Women's Veterans Association of America (NWVAA) in San Diego. The NWVAA's president Tara Jones told CNN that she's spoken to seven or eight women in the organization who had uncomfortable encounters with Filner.

"He went to dinners, asked women out to dinners, grabbed breasts, buttocks. The full gamut. Everything that is complete violation of what we stand for," Jones said. "He's a sexual predator. And he used this organization for his own personal agenda."

"What goes on in San Diego is up to the people of San Diego. I'm not here to make any judgements," Pelosi said at the time and after Filner admitted to wrongdoing, again ignoring his known behavior in Congress.

It wasn't until years later when the Filner story hit a fever pitch that Pelosi started to give a damn, not because she cared about his victims, but because he was making the Democrat Party look bad. She ultimately called for his resignation under pressure.

Filner eventually resigned in disgrace, but managed to secure a full pension on his way out the door, did a short stint in sex rehab, pleaded guilty to battery against two women and was quickly welcomed back into California's powerful circle of Democrats -- locally and in Washington D.C. After a dozen women came forward will allegations of sexual harassment and assault, Filner's legal bills were fully covered by California taxpayers.

Pelosi knew all about filthy Filner's depraved behavior, but because he was a close friend who helped her co-found the Congressional Progressive Caucus, she gave him pass. He also, naturally, was close to Bill Clinton. Clinton endorsed his run for mayor in 2012 after more than a decade in Congress.

Needless to say, Pelosi's stammering over sexual harassment allegations and sudden interested in due process when a Democrat stands accused is nothing new. She's long been defending and carrying political water for sexual predators.

I'll leave you with this irony:

#YesAllWomen deserve to live free from threats of domestic violence & sexual assault. We must shine a bright light on such despicable crimes

Correction: A previous version of this story stated Filner pleaded guilty to three counts of battery. It was two counts.