Here's What's Next in Congress For the Iran Nuclear Deal 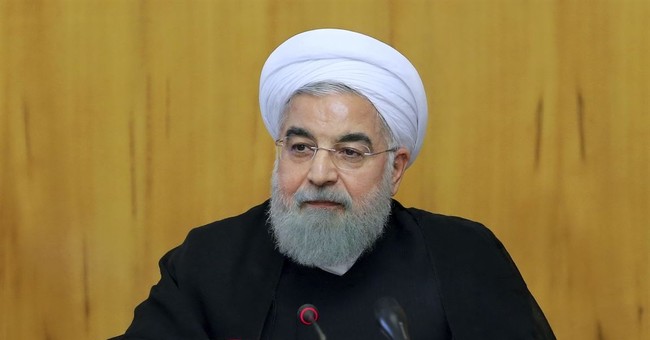 Friday afternoon from the White House, President Trump officially declared he will not re-certify the Iran nuclear agreement and said if Congress can't properly renegotiate the deal, the United States will walk away.

So, what happens next? Republican Senators Marco Rubio, Tom Cotton and Bob Corker have already started working on legislation that will snap back sanctions for one year, enforce the restrictions already in place, drop the sunset provisions in the deal, increase access for nuclear inspectors inside Iran and limit the centrifuge program.

According to the Free Beacon's Adam Kredo, Congress will also demand Iran accepts updated terms of the deal and implement new provisions about Iran's ballistic missile development. You can read his entire reporthere:

Sources who spoke to the Free Beacon about the effort to tighten the deal said that many in Congress would be willing to reimpose all key sanctions on Iran if it does not agree to abide by the stricter enforcement regulations.

"The days of appeasing the Mullah's every wish and sitting back and watching as the terrorist state goes nuclear are over," said one senior congressional official intimately familiar with the new proposal. "Congress overwhelmingly opposed Obama's disastrous deal with Iran. Now's the time to assert our constitutional responsibility to defend our nation and use all tools of U.S. power to permanently prevent an nuclear armed Iran."

This new legislation is similar to the policy approach advocated by senior Trump administration officials, such as Secretary of State Rex Tillerson, who told reporters late Thursday the administration is looking to create a parallel nuclear deal that gives Congress a larger role in ensuring Iranian compliance.

These would include "trigger points that are specific to the nuclear program itself, but also deals with things like their ballistic missile program," according to Tillerson.

Roskam's new legislation, called the JCPOA Improvement Act of 2017, seeks to do precisely this.

In addition to banning Iran from developing, testing, and operating ballistic missile technology—which was never addressed in the original nuclear agreement – the new legislation would impose even stricter regulations on the amount of nuclear enrichment Iran can legally engage in.

It also would stop Iran from installing advanced nuclear centrifuges that can enrich uranium, the key component in a nuclear weapon, much faster than older versions of this equipment.

Congress has 60 days to get this done.