Trump Riles Up Crowd With Texas Flag: We Love You! 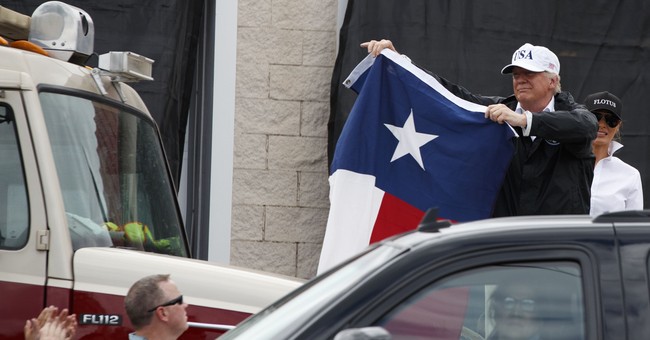 After speaking with a number of local government officials and FEMA at the Anneville Fire Department in Corpus Christi Tuesday afternoon, President Trump hopped on a fire truck with the Texas flag and addressed a crowd of people waiting outside.

"We love you. You are special. We are here to take care of you," Trump said. "This has been a total cooperative effort."

"It's historic, its epic, but I tell tel you it happened in Texas and Texas can handle anything," he continued. "We are going to get you back and operating immediately."

.@POTUS addresses crowd from front of fire truck outside of in Annaville Station 1. #HurricaneHarvey #POTUSinTX pic.twitter.com/vDIuCITgDA

President Trump speaks in Texas: "This has been a total cooperative effort... Texas can handle anything" https://t.co/gYIKqbfmTz

Prior to leaving the building, President Trump made remarks before receiving a briefing on the hurricane damage and promised to bring relief as quickly as possible during recovery efforts.

“We want to do it better than ever before,” Trump said, adding there will be no congratulating of each other until the job is done. “We want to be looked at in five years or ten years from now as this is the way to do it.”

The President is on his way to Austin, where he will receive another briefing. Because of the ongoing bad weather, it is still unclear if he will visit the most damaged areas of Houston.