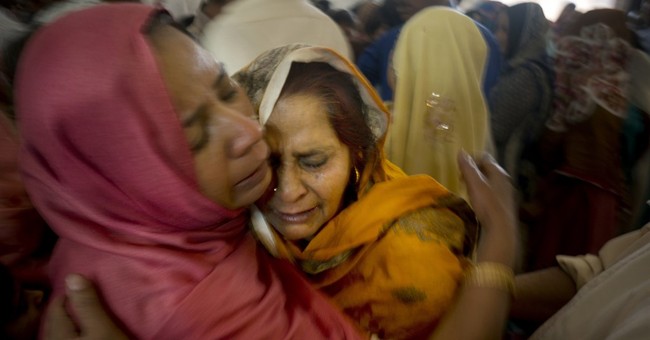 On Easter Sunday in Lahore, Pakistan, Christian women, children and their families went to a park to congregate and celebrate their Lord and Savior Jesus Christ. The day turned to horror when they were targeted for their faith by an Islamic suicide bomber, who detonated his vest and killed 72 people while injuring hundreds more.

The Pakistani Taliban, which has pledged allegiance to ISIS, quickly took responsibility for the attack and specifically stated the crowd was targeted because it wasn't just any crowd, but a Christian crowd worshiping on one of their holiest, most joyous days.

"We claim responsibility for the attack on Christians as they were celebrating Easter," Pakistan Taliban spokesperson Ehansullah Ehsan

But you wouldn't know this fact if you simply read the initial State Department statement released in response to the attack.

"The United States condemns in the strongest terms today’s appalling terrorist attack in Lahore, Pakistan. This cowardly act, which targeted innocent civilians in the Gulshan-e-Iqbal Park, has killed dozens and left scores injured. The United States stands with the people and Government of Pakistan at this difficult hour. We send our deepest condolences to the loved ones of those killed and injured, and our thoughts and prayers are with the people of Lahore as they respond to and recover from this terrible tragedy," State Department spokesman John Kirby released in a statement. "Attacks like these only deepen our shared resolve to defeat terrorism around the world, and we will continue to work with our partners in Pakistan and across the region to combat the threat of terrorism."

After criticism, the State Department attempted to clarify.

State Department spokesman John Kirby said Monday that his department at this point believes the Pakistan bombing that killed 70 people was orchestrated by the Islamic State, and was aimed at Christians celebrating Easter Sunday.

State didn't mention that as a possible motive on Sunday when the event occurred, but Kirby said that's because less was known when it happened. But he said State now sees it as an act against Christians.

On another note, two weeks ago Secretary of State John Kerry officially declared the extinction of Christians and other minority religious groups by ISIS a genocide, but stressed the Obama administration wouldn't be changing strategy in order to stop it.