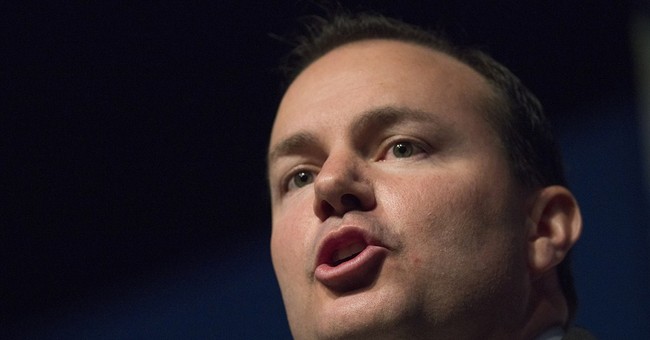 “The president has full and complete power to nominate individuals to the Supreme Court, as he will reportedly do later today,” Lee said in a statement. “But the Constitution also gives the Senate the full and complete power to reject or confirm the nominee,” Lee continued. “It’s as simple as that. In light of the contentious presidential election already well underway, my colleagues and I on the Judiciary Committee have already given our advice and consent on this issue: we will not have any hearings or votes on President Obama’s pick.”

“Any meeting with any nominee put forward by President Obama would only be a waste of the Senate’s time. The Court has very ably dealt with temporary absences in the past and will do so again now,” Lee continued.

It should be noted President Obama has a constitutional obligation to submit a Supreme Court nomination, but the Senate has no obligation to hold hearings or to confirm the nominee.

“When they structured our nation, the founders placed trust in three separate but equal branches of government.  Co-equal authorities are throughout the Constitution, including Article II, Section 2, where the power to nominate an individual to the Supreme Court is granted to the President and authority is given to the Senate to provide advice and consent.  Nowhere in the Constitution does it describe how the Senate should either provide its consent or withhold its consent," Judiciary Committee Chairman Chuck Grassley released in statement. "Today the President has exercised his constitutional authority.  A majority of the Senate has decided to fulfill its constitutional role of advice and consent by withholding support for the nomination during a presidential election year, with millions of votes having been cast in highly charged contests.  As Vice President Biden previously said, it’s a political cauldron to avoid.  Judge Bork learned even after being unanimously confirmed for a circuit court judgeship, the confirmation process for the Supreme Court is unlike any other."

“It’s also important to remember the type of nominee President Obama said he’s seeking.  He says his nominee will arrive at ‘just decisions and fair outcomes’ based on the application of ‘life experience’ to the ‘rapidly changing times.’  The so-called empathy standard is not an appropriate basis for selecting a Supreme Court nominee," Grassley continued. “A lifetime appointment that could dramatically impact individual freedoms and change the direction of the court for at least a generation is too important to get bogged down in politics.  The American people shouldn’t be denied a voice.  Do we want a court that interprets the law, or do we want a court that acts as an unelected super legislature?  This year is a tremendous opportunity for our country to have a sincere and honest debate about the role of the Supreme Court in our constitutional system of government.”


In February, Judiciary Committee Republicans sent a letter to Majority Leader Mitch McConnell explaining their decision not to hold hearings.

"We intend to exercise the constitutional power granted the Senate under Article II, Section 2 to ensure the American people are not deprived of the opportunity to engage in a full and robust debate over the type of jurist they wish to decide some of the most critical issues of our time.  Not since 1932 has the Senate confirmed in a presidential election year a Supreme Court nominee to a vacancy arising in that year. And it is necessary to go even further back — to 1888 — in order to find an election year nominee who was nominated and confirmed under divided government, as we have now," the Senators wrote. "Accordingly, given the particular circumstances under which this vacancy arises, we wish to inform you of our intention to exercise our constitutional authority to withhold consent on any nominee to the Supreme Court submitted by this President to fill Justice Scalia’s vacancy.  Because our decision is based on constitutional principle and born of a necessity to protect the will of the American people, this Committee will not hold hearings on any Supreme Court nominee until after our next President is sworn in on January 20, 2017."

As for the rest of the Senate, Majority Leader Mitch McConnell will issue a statement about Obama's nominee later today.

McConnell & Grassley voted against Merrick Garland for federal bench in 1997