McConnell Makes a Stand: Vacancy Shouldn't Be Filled Until America Has a New President 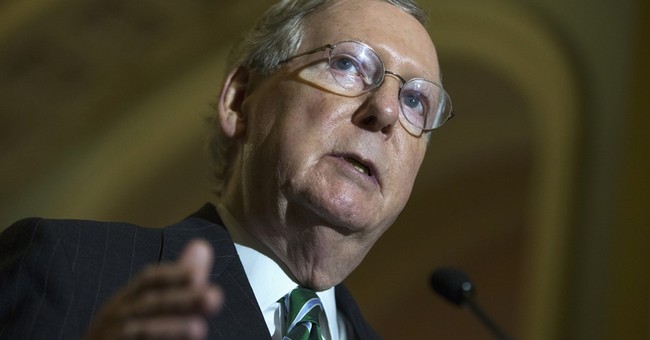 After three decades on the Supreme Court, Justice Antonin Scalia has died.

The overwhelming question hanging over partisan Washington gridlock and a heated presidential election is now, of course, what's next?

There are a number of things and options to keep in mind as we move forward. 1) Obama will move quickly and likely already has a name for his preferred nominee ready to go 2) The Senate can demand the nominee be a compromise 3) The Majority Leader and the Senate can delay or refuse to confirm Obama's nominee. This by default has the potential to run out the clock on Obama's second term before another nominee can be appointed and confirmed by the Senate.

Historically, most presidents nominate within a week of a vacancy on the Supreme Court. Bush 43 did. So did Obama.

Majority Leader Mitch McConnell has released a statement, saying the vacancy should not be filled until Americans choose the next president.

"Today our country lost an unwavering champion of a timeless document that unites each of us as Americans. Justice Scalia's fidelity to the Constitution was rivaled only by the love of his family: his wife Maureen his nine children, and his many grandchildren. Through the sheer force of his intellect and his legendary wit, this giant of American jurisprudence almost singlehandedly revived an approach to constitutional interpretation that prioritized the text and original meaning of the Constitution. Elaine and I send our deepest condolences to the entire Scalia family," McConnell released in a statement. “The American people should have a voice in the selection of their next Supreme Court Justice. Therefore, this vacancy should not be filled until we have a new President.”

To be clear, McConnell and the Senate have the constitutional authority to block confirmation of a nominee from Obama. They do not have the constitutional authority to keep Obama from issuing a nomination. The President has the right to issue a nominee and the Senate has the right to block a nominee, either by vote or by refusing to bring the nomination up for a vote on the floor.