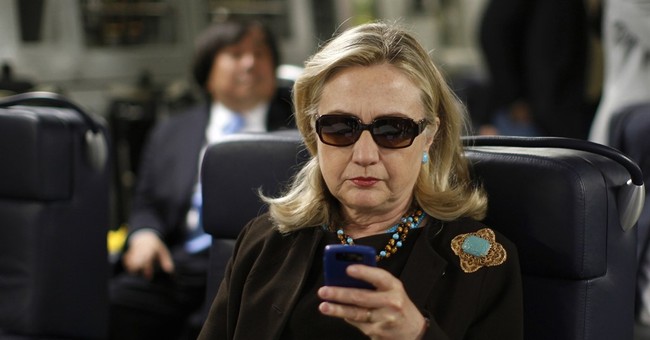 Judicial Watch today released nearly 70 pages of State Department records that show that former Secretary of State Hillary Clinton and her top aides, Deputy Chiefs of Staff Huma Abedin and Jake Sullivan, received and sent classified information on their non-state.gov email accounts.  The documents, also available on the State Department website, were obtained in response to a court order from a May 5, 2015, lawsuit filed against the State Department (Judicial Watch, Inc. v. U.S. Department of State (No. 1:15-cv-00684)) after it failed to respond to a March 18 Freedom of Information Act (FOIA).

The new documents show that Hillary Clinton used the clintonemail.com system to ask Huma Abedin (also on a non-state.gov email account) to print two March 2011 emails, which were sent from former British Prime Minister Tony Blair (using the moniker “aclb”) to Jake Sullivan on Sullivan’s non-state.gov email account.  The Obama State Department redacted the Blair emails under Exemption (b)(1) which allows the withholding of classified material.  The material is marked as being classified as “Foreign government information” and “foreign relations or foreign activities of the US, including confidential sources.”

The newly released Abedin emails include a lengthy exchange giving precise details of Clinton’s schedule using unsecured government emails. The email from Lona J. Valmoro, former Special Assistant to Secretary of State Clinton, to Abedin and Clinton reveals exact times (including driving times) and locations of all appointments throughout the day. Another itinerary email provides details about a meeting at the United Nations in New York at 3:00 on Tuesday, January 31, 2012, with the precise disclosure, “that would mean wheels up from Andrews at approximately 12:00pm/12:15pm.”


Today, Fox News is out with an exclusive report showing Clinton shared classified information with at least a dozen aides, not just Abedin and Sullivan, that was not only top secret and classified, but so sensitive and damaging it cannot be released.

At least a dozen email accounts handled the “top secret” intelligence that was found on Hillary Clinton’s server and recently deemed too damaging for national security to release, a U.S. government official close to the review told Fox News.

The official said the accounts include not only Clinton’s but those of top aides – including Cheryl Mills, Huma Abedin, Jake Sullivan and Philippe Reines – as well as State Department Under Secretary for Management Patrick Kennedy and others.

A second source not authorized to speak on the record said the number of accounts involved could be as high as 30 and reflects how the intelligence was broadly shared, replied to, and copied to individuals using the unsecured server.

The State Department recently confirmed that the messages in question include the most sensitive kind of intelligence.

As Judicial Watch President Tom Fitton pointed out yesterday, this means multiple indictments are in order.

“These emails show that Hillary Clinton isn’t the only Obama official who should be worried about being prosecuted for mishandling classified information.  Her former top State aides (and current campaign advisers) Huma Abedin and Jake Sullivan should be in the dock, as well,” Judicial Watch President Tom Fitton said. “The Obama State Department has now confirmed that Clinton, Abedin, and Sullivan used unsecured, non-government email accounts to communicate information that should now be withheld from the American people ‘in the interest of national defense or foreign policy, and properly classified.’ When can we expect the indictments?”


Meanwhile, the Clinton campaign is demanding sensitive emails containing classified information should be released to the public. Last week the Clinton campaign argued that 22 emails found on her private server and deemed too classified to released were simply a product of classification "run-amok." Keep in mind the emails in question cannot be released due to incredible damage exposure of the information contained within them would do to national security and human sources.

The FBI officially confirmed earlier this week that agents are in fact investigating Clinton's improper handling of classified information. There's no doubt with these findings the FBI is also investigating her aides, even if they aren't aware of it yet.