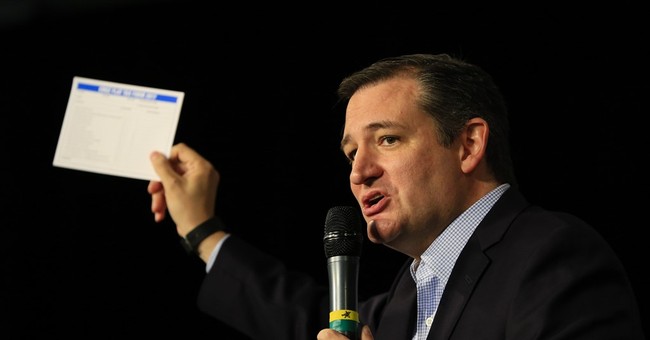 "We will sharply reduce the alphabet soup of government entities, beginning with the ABCs that should not exist in the first place: The Agencies, Bureaus, Commissions, and other programs that are constitutionally illegitimate and harmful to American households and businesses. It’s time to return to a federal government that abides by our constitutional framework and strips power from unelected bureaucrats," Cruz writes.

The IRS and these cabinet agencies are unnecessary and will be shuttered for the following reasons:

-Internal Revenue Service – to dramatically simplify the tax code and enable everyone to fill out their taxes on a postcard or smartphone app.

-Department of Education – to return education to those who know our students best: parents, teachers, local communities, and states. And to block-grant education funding to the states.

-Department of Energy – to cut off the Washington cartel, stop picking winners and losers, and unleash the energy renaissance.

-Department of Commerce – to close the “congressional cookie jar” and promote free enterprise and free trade for every business.

-Department of Housing and Urban Development – to offer real solutions that lift people out of hardship, rather than trapping families in a cycle of poverty, and to empower hurting Americans by reforming most of the remaining programs, such as Section 8 housing.


Cruz argues in the plan he won't do it through executive action, but by working with Congress. You can read more about his plan here.
AOC Thinks Conservative Justices Should be Impeached for 'Lying Under Oath'
Sarah Arnold
Bill Maher Knows Where Progressives Are Going to Blow It on Abortion
Matt Vespa