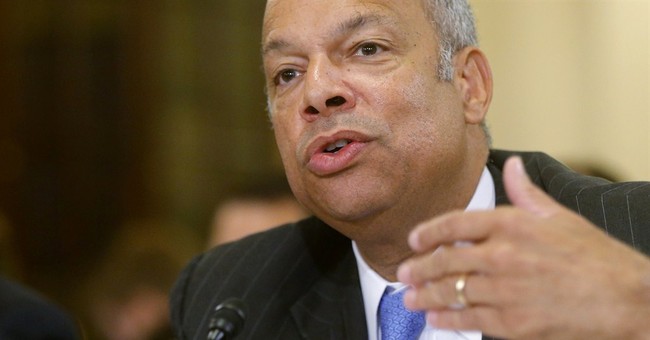 Former Obama campaign fundraiser and current Homeland Security Secretary Jeh Johnson made an appearance on Meet the Press over the weekend to talk about the ongoing unaccompanied minor crisis on the southern border with Mexico as thousands of children continue to travel north from countries like Guatemala, Honduras and El Salvador.

Despite multiple interviews with illegal immigrants revealing they were sent here knowing they wouldn't be turned away by the Obama administration and that if they had a relative already in the United States they'd be able to stay thanks to President Obama's executive action, Johnson tried to keep the Obama administration far away from taking responsibility for the problem.

"There are no free passes once you get here. DACA [Obama's deferred action program] is not available for these children," Johnson said.

When asked by host David Gregory how many illegal immigrants will have poured over the border by the end of 2014, Johnson refused to answer and said he believes they will "stem the tide." Further, Johnson refused to say whether unaccompanied children or small families here illegally will be deported.

"Are they going to be deported or not?" Gregory asked. "Will most of these children we see in this desperate situation stay in America or will they be returned to their homes in Central America?"

"There is a deportation proceeding that is commenced against illegal migrants, including children. We are looking at ways to create additional options for dealing with the children in particular," Johnson said.

Johnson also said the border is not open to illegal migration, but nothing has been done to bolster border security as a result of this crisis. In fact, the border is less secure now thanks to Border Patrol agents being tasked with paper work and babysitting instead of patrol.