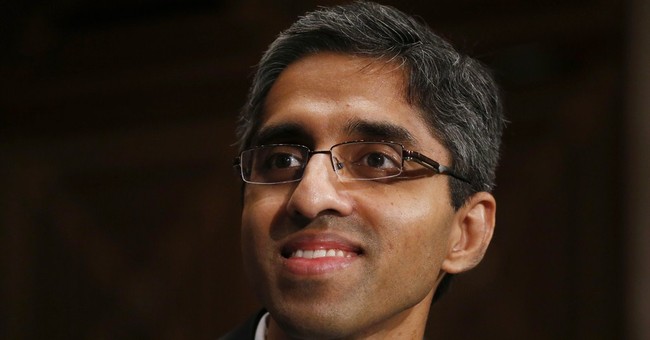 President Obama's anti-gun nominee for Surgeon General, Dr. Vivek Hallegere Murthy, could go down in flames on the Senate floor. Murthy, who has a history of calling guns a "healthcare issue," classifying guns as a "public health threat" and of slamming the National Rifle Association, is being opposed not by just Republicans, but numerous Democrats in an election year.

Democratic Senate aides estimated on Monday that from eight to 10 Democrats may oppose Murthy’s nomination if the vote were to be held soon, mostly because of his left-leaning views on gun policy, which have attracted opposition from the National Rifle Association. An aide closely following the nomination described a vote for Murthy as carrying “very little political or policy gain but plenty of downside.”

NRA-ILA Executive Director Chris Cox has warned Murthy will treat gun ownership "as a disease" should he be confirmed to fill the powerful government position he has been nominated for. Murthy has said he will not make guns a "priority" should he make it past Democrat votes. The NRA is strongly opposing the nomination and has urged its five million members to contact their Senators. Cox has also written a letter to Senate leadership opposing the nomination. Ten votes from Democrats to oppose Murthy would render Majority Leader Harry Reid's elimination of the filibuster worthless.

Most recently, President Obama's nominee to head up the Civil Rights Division in the Department of Justice, Debo Adegbile, was blocked by the Senate due to his past voluntary advocacy of convicted cop killer Mumia Abu-Jamal.