Is Your Little Boy Playing "Tug of Peace" Instead of "Tug of War" at School? 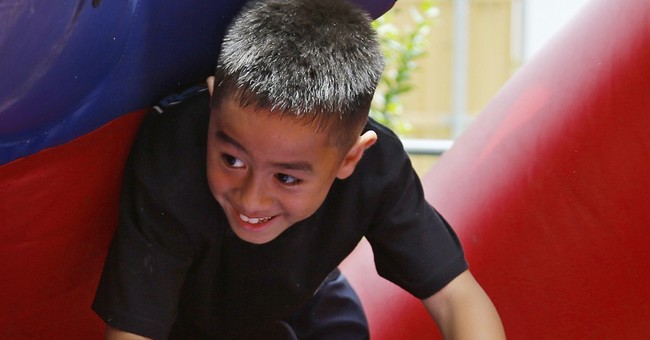 American Enterprise Institute Scholar Christine Hoff Sommers is out with an interesting and incredibly important article in TIME today. Sommers points out how little boys are demonized in our public school systems for simply being boys and playing in a traditional way that is crucial to development and learning. The whole thing is worth a read, but here is an excerpt.

As school begins in the coming weeks, parents of boys should ask themselves a question: Is my son really welcome? A flurry of incidents last spring suggests that the answer is no. In May, Christopher Marshall, age 7, was suspended from his Virginia school for picking up a pencil and using it to “shoot” a “bad guy” — his friend, who was also suspended. A few months earlier, Josh Welch, also 7, was sent home from his Maryland school for nibbling off the corners of a strawberry Pop-Tart to shape it into a gun. At about the same time, Colorado’s Alex Evans, age 7, was suspended for throwing an imaginary hand grenade at “bad guys” in order to “save the world.”

In all these cases, school officials found the children to be in violation of the school’s zero-tolerance policies for firearms, which is clearly a ludicrous application of the rule. But common sense isn’t the only thing at stake here. In the name of zero tolerance, our schools are becoming hostile environments for young boys.

Girls occasionally run afoul of these draconian policies; but it is mostly boys who are ensnared. Boys are nearly five times more likely to be expelled from preschool than girls. In grades K-12, boys account for nearly 70% of suspensions, often for minor acts of insubordination and defiance.

But are boys getting expelled from school because they are terribly misbehaved? Hardly. They're being expelled thanks to a lack of common sense in our school system and ridiculous one-size fits all, no-tolerance policies. Not to mention, the political correctness run amok isn't helping. Take for example schools that require children to play "tug of peace" instead of "tug of war," something Sommers points out in her piece.

Boys will be boys and should be allowed to be boys inside our school systems with guidance from rational adults, not nanny state overlords.

This Sloppy Pro-Biden 'Brandon' Ad is So Bad, It's Hard to Tell Who It's Supporting
Townhall
PERIOD: DCCC insists that 'Republicans' have no business interfering in your private medical decisions
Twitchy
Psaki Slips up on Who Is in Charge at the WH
Redstate
Where the Hell Are the Men?
PJ Media