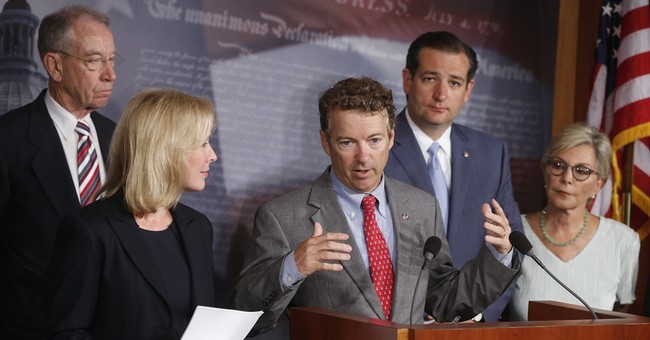 In a press conference on Tuesday, Senator Rand Paul (R-KY) and Senator Ted Cruz (R-TX) publicly joined Senator Kirsten Gillibrand (D-NY) in her efforts to address and combat sexual assault in the military.

Bipartisan outrage sparked in May when the Pentagon’s annual report highlighted that up to 26,000 military members reported cases of sexual assault; that’s an increase of 7,000 cases from last year.

At the press conference, Paul became the fifth Republican to sign the proposed legislation, requiring all sexual assault charges to be removed from the military chain of command and handled instead by independent, military prosecutors.

Cruz was already one of four Republicans to vote for the bill on June 4th when it was presented-and shot down- in a Senate Armed Services Committee meeting.

Together, with Gillibrand, they spoke out:

“Some say that we have no bipartisan cooperation around here, and I disagree,” Paul said,…“I think this is a great example of how people from both sides come together and are willing to work on a problem and look honestly at what the problem is.”

Cruz said that he was convinced by the arguments made during debate in the Armed Services Committee:

“I was persuaded by Sen. Gillibrand’s exceptionally passionate and able advocacy,” he said.

When Gillibrand originally proposed the amendment to the National Defense Authorization Act of 2014, she was met with overwhelming opposition from every branch commander, as well as members from both parties, including Senator Levin (D-Mich) who proposed a water-down version of the bill that will keep sexual assault cases within the chain of command.

Gillibrand’s proposal is thought to reach the Senate as early as next week; with Paul and Cruz’s signatures the bill has reached 33 co-sponsors, still 18 votes short of the 51 votes needed to pass legislation.

The dual support from these nationally recognized, junior senators will hopefully convince more Republicans to support the legislation, but equally important, it is yet another piece of strong evidence that the left’s worn-out narrative regarding ‘Republicans and women’ is not only false, but constantly looking more ridiculous and far-fetched.

Here are two of the most popular, innovative Republican Senators (not to mention future 2016 Presidential nominees) taking an active stance against military procedures to ensure the safety and preservation of women’s rights. The left can play ignorant and continue to push the notion that Republicans are anti-women, but with the Paul’s and the Cruz’s of the world gaining more momentum and national attention through their pro-active stances on civil liberties, it is only a matter of time before the left’s tired narrative gets completely wiped out.