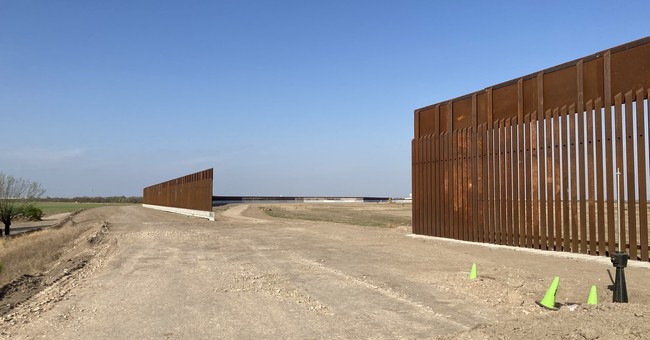 The Biden administration's decision to halt construction of the new border wall system being built under President Donald Trump is not only putting the country's security in jeopardy, but we now know how money is being spent in order to not finish the contracts.

In a new minority staff report from a subcommittee of the Homeland Security and Government Affairs Committee, Government Operations and Border Management, they have found the Biden administration has spent around $3 million a day to prevent further construction of the wall, totaling around $2 billion so far:

"By the end of the Trump Administration, $10 billion had been transferred to U.S. Department of Defense (DOD) accounts for border wall construction and related projects. As of June 2021, the Biden Administration has wasted roughly 20 percent ($2 billion) of that $10 billion on suspension and termination costs related to border wall contracts. This waste of taxpayer resources threatens military readiness and national security.

"The Biden Administration is paying contractors at least $3 million per day to guard steel, concrete, and other materials in the desert. At the same time, U.S. Customs and Border Protection (CBP) has encountered over 1.1 million migrants along the Southwest border this fiscal year – a 20 year high. This policy decision raises significant concerns about the Biden Administration’s immigration agenda and requires both Congressional oversight and legislative action."

The Trump administration had secured funding to build over 738 miles of wall along the U.S.-Mexico border, in both places where old barriers would be replaced and in areas where no wall had previously existed.

"Between January 20, 2021 and July 15, 2021, GOBM minority staff estimates that DOD has paid contractors on the seven projects receiving 2808 funds between $618 million and $708 million. These costs will continue to accrue until the contracts are terminated," the report continues. "DOD estimates that termination of contracts will take roughly 12 to 18 months.17 As a result, these costs will continue to increase for the foreseeable future."

Gaps in the border wall that were created after President Joe Biden halted construction when he first entered office have resulted in funnels in places where U.S. law enforcement does not want them. It has also made it easier for family units and unaccompanied minors to illegally cross into the U.S. to turn themselves into Border Patrol, bogging them down, thus making it easier for those who do not want to be caught to avoid detection.