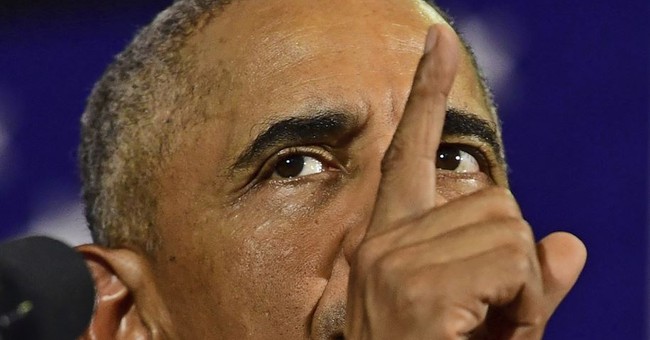 It's surreal.  For years, conservatives (quite understandably) viewed Barack Obama as an embodiment of the Democrats' leftward lurch -- and now, if this CNN report is to be believed, even he's growing frustrated by the deepening extremism of his party.  It seems as though analysts and commentators astonished by the extent to which the 2020 field is throwing the Obama legacy overboard as too 'moderate' aren't alone.  The 44th president has apparently noticed it as well, and he's none too pleased:

CNN's Newsroom co-host Jim Sciutto mentioned Obama wasn't pleased by criticism from Democratic presidential candidates and asked Buck what she was learning behind the scenes. "As you know, Obama has been trying to stay out of this primary as much as possible, keeping quiet, and not making any endorsements even with his former vice president Joe Biden in the race," Buck said. "But privately Obama, our CNN colleagues are reporting, is expressing exasperation at how far left the party is moving on some policy issues and of course breaking with some of the things he did when he was president." "Primaries are all about the legacy of the last president where the party is moving, and it's no secret that the Democratic Party right now has been moving far to the left policy-wise relative to the Obama administration," Buck continued. "And it is for many of these candidates a balancing act because Joe Biden of course is essentially a third term of President Obama."

As an aside, I'll note that Scuitto worked in the Obama administration.  Some liberals may argue that this development is, among other things, proof that Obama was never the wild-eyed radical that Republicans painted him as, but I don't think that's the right framing.  My read on Obama, based on his resume and body of work, is that he's a committed leftist ideologue who is nevertheless gifted as a tactical pragmatist and incrementalist.  So his objection here, if I were to guess, is both personal and pragmatic.  He's no doubt annoyed to see his own party elbowing large pieces of his agenda and legacy aside (and so soon, at that), but he's also likely concerned that 2020 Democrats are hampering their ability to win back the White House by adopting positions that he knows will alienate many persuadable voters.

In the short term, the biggest beneficiary of this trend -- besides Donald Trump -- may well be Joe Biden.  By appearing to be the only person onstage committed to unequivocally embracing Obama, he's appealing directly to the majority of Democratic voters who support exactly that.  This includes a great many black voters, who are an essential and influential part of the primary coalition, and among whom Biden has been dominating thus far.  If the current dynamic keeps up, how soon until Obama's private grousing becomes less private?  And what might that look like?  Meanwhile, here's what the surging Democratic Socialists of America are up to:

A look into what happened during one part of the national convention of the Democratic Socialists of America in Atlanta this weekend. pic.twitter.com/bWekVQxPWV

The revolution eats itself, as the Democratic Party has also been learning quite a lot lately.  By the way, are the cartoonish excesses of the DSA even remotely relevant?  Sure it is, Allahpundit argues:

To my surprise, the national DSA confab this weekend isn’t getting much media attention. By any measure, they’re a rising force politically. Bernie Sanders, an avowed socialist, is second in most presidential primary polling. Alexandria Ocasio-Cortez has the biggest online following of any member of Congress and her comrades in the Squad are now national figures thanks to their war of words with Trump. Yesterday’s convention festivities featured 19 socialists who’ve been elected to local office back home. Seems like the media should be keeping tabs on what’s going on. Unless, I suppose, they’ve concluded that what’s going on might be unhelpful to the Democratic cause.

What, pray tell, might be "unhelpful"? Could it be their overwhelming formal adoption of an infamous -- er -- "Republican talking point"?  Sorry, comrades, but didn't the Democrats effectively get there first?