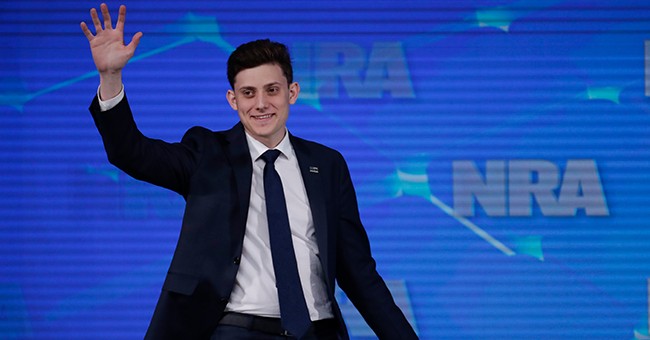 In the immediate aftermath of the heinous school shooting in Parkland, Florida, I interviewed Kyle Kashuv, a student at Marjory Stoneman Douglas High School.  Unlike a number of his high-profile classmates who gained national prominence by loudly and passionately advocating stricter gun control measures, Kashuv leaned to the right and defended the Second Amendment.  He opposed some of his peers' advocacy and pursued other legislative avenues geared at preventing future massacres.  I've stayed in touch with Kyle in the intervening year-plus, watching as his role in our national gun policy debate has played out.  By his own admission, Kyle has made both positive contributions and his fair share of mistakes over the course of his activism, and was preparing to start a new chapter of his life as a Harvard undergraduate.

Several weeks ago, he informed me that comments he'd made in a private setting years earlier were being dredged up and circulated on social media.  Among them were jokes about engaging in a school shooting -- and, worse, uses of the N-word.  All of the offending remarks were made while Kashuv was in his mid-teens, prior to the life-altering horror he and his schoolmates endured.  He told me he was convinced the purpose of resurfacing his words at this particular moment was to foment a controversy that would result in Harvard reversing its acceptance decision.  I asked Kyle why he said what he said, noting that there is no acceptable context for him to have used the word that he did.  He explained that he and his friend group at the time regularly engaged in a thoughtless and immature battle of 'shock value' one-upsmanship, which sounds about right for a group of teenaged boys.  Still, there was nothing right about deploying that slur.  Kyle told me he now understands this and that he was ashamed of his decision to toss around an ugly and hurtful word, treating it like a game.

My advice to Kyle was to tell the truth -- don't lie, don't spin, don't deflect -- and to apologize with humility and contrition.  And that's what he did.  Harvard became aware of the situation and opened an inquiry into it.  Kyle cooperated fully, satisfying their various requests.  Then came the verdict:

Among other points he made in this string of tweets, Kyle noted that Harvard's decision-makers declined to meet with him to review, discuss, or revisit their determination.  It appears to be final.  There are a number of angles to this story, including the matter of who actively exploited these years-old private comments (the main source is a Google doc in which contributors fostered a 'Cards Against Humanity'-type vibe) as a cudgel against Kyle.  My understanding is that among those responsible for 'leaking' and promoting this information is a temporary, unholy alliance of figures on the Alt-Right and Left, united in their desire to exact political and personal vengeance.  There are also questions of double standards at play, which I'll let others ponder and tease out.  Most of my thoughts on this outcome are summed up in this short tweet thread I posted earlier:

This does not feel one bit like ‘progress.’ My advice to Kyle before all of this blew up publicly was to tell the truth & to apologize deeply and sincerely (there is no excuse for using that word—even if the context was teenage boys’ private shock Olympics). He did both things... https://t.co/fvnD8yHecI

Some will perversely revel in this ‘victory’ for social ‘justice.’ But this is a very ugly confluence of events — starting with a child’s gross mistake, mined and deployed by people with an agenda, then compounded by adults...no one looks good here.

Harvard should at least meet w/ Kyle to discuss their potentially life-altering decision. And Kyle should not be treated as irretrievably radioactive by elite institutions whose academic standards he has undeniably met as a student, especially in light of his candor & contrition.

Do I believe Kyle was singled out for punishment because of political beliefs?  Yes.  Other (less prominent and politically liberal) students who contributed to the same Google doc also made deliberately offensive and inflammatory comments, but none of their names were publicly linked to their problematic content.  This was a targeted hit.  That said, Kyle opened himself up to the hit by saying what he said.  This was not a fabrication, and the racial epithet he employed is widely understood to be verboten, for good reason.  Context may be a mitigating factor, but it's not an excuse or a justification.  What disturbs me about this situation is the deliberate and targeted weaponization of moronic teenage bull sessions for a specific desired outcome, with Harvard rewarding the tactic.  I wonder how many Americans would receive a clean bill of comportment health if some of their peers had secretly developed a political-style 'opposition research' file cataloguing the worst excesses of their teenage years.  How many people would pass muster if their nastiest high school warts, moments, lapses of judgment, and character failures were chronicled, then used against them during the college application and matriculation process?

I've consistently opposed unjust and overreaching scalp-collection mobs right, left, and center.  I believe holding the impetuous, youthful blatherings of teenagers against them -- especially years after the fact, often in an apparent effort to mar a current accomplishment -- is vindictive.  Society is right to inculcate certain values, including the conviction that racial slurs are despicable.  We should be able to teach those lessons, and embrace accountability, without overcorrecting or rewarding bad-faith attempts at adolescent score settling.  This episode fuels many Americans' creeping sense that some of our institutions are regressing and forfeiting judgment, perspective and mercy in the name of 'progress.'  This doesn't feel like progress.  Not to me, at least.