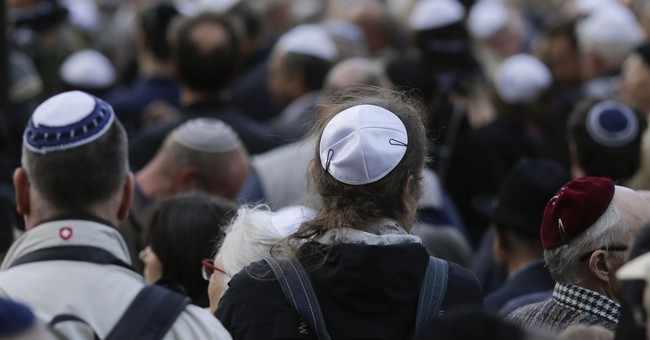 While I was visiting Germany over the long weekend, this stomach-turning story broke and made a bit of a splash, and understandably so.  The German government's top official on combating anti-semitism has recommended that Jews take steps to hide their religious and ethnic heritage while in public, in order to prevent hate crimes and incidents against them (update: under fierce criticism, the official has reversed course).  This would be a stunning admonition coming from any senior figure in Berlin, but it's particularly galling and alarming coming from the man explicitly charged with fighting anti-Jewish bigotry in a nation with an exceptionally dark history on the subject.  Against this grisly backdrop in particular, it's impossible to frame these comments as anything other than a victim-blaming disgrace:

Germany’s government commissioner on antisemitism has warned Jews about the potential dangers of wearing the traditional kippah cap in the face of rising anti-Jewish attacks. “I cannot advise Jews to wear the kippah everywhere all the time in Germany,” Felix Klein said in an interview published Saturday by the Funke regional press group. In issuing the warning, he said he had “alas, changed my mind (on the subject) compared to previously.” Klein, whose post was created last year, cited “the lifting of inhibitions and the uncouthness which is on the rise in society” as factors behind a rising incidence of antisemitism...Klein’s comments came just weeks after Berlin’s top legal expert on antisemitism said the issue remains entrenched in German society...Antisemitic crimes rose by 20% in Germany last year, according to interior ministry data...The arrival in parliament of the far-right AfD has also contributed to the change in atmosphere, as has the arrival of more than a million asylum seekers, many from Muslim countries such as Syria, Afghanistan or Iraq. Klein said that while the far-right was to blame for the vast majority of antisemitic crime, it was apparent that some Muslims were also influenced by watching certain television channels “which transmit a dreadful image of Israel and Jews”.

Israel's government has responded with an appropriate dose of stunned horror:

Israeli President Reuven Rivlin said on Sunday that the warning to Jews on the dangers of wearing the kippah were a “capitulation to anti-Semitism” and evidence Jews were unsafe there. Rivlin said Klein’s remarks “shocked” him, and while appreciating the German government’s “commitment to the Jewish community,” accused it of bowing to those targeting Jews in Germany. “Fears about the security of German Jews are a capitulation to anti-Semitism and an admittance that, again, Jews are not safe on German soil,” he said. “We will never submit, will never lower our gaze and will never react to anti-Semitism with defeatism - and expect and demand our allies act in the same way,” he said.

Last year, Israeli Prime Minister Benjamin Netanyahu cited a CNN survey of European attitudes, attacking the far Left and Islamists for their contributions to anti-Semitic sentiment on the continent.  The poll showed that "over one-fifth of them believe that Jewish people have too much influence in finance and politics, while over a third admitted that they knew nothing at all or “just a little” about the Nazi regime’s murder of six million Jews during World War II," according to the Times of Israel.  "Nearly one in four said Jews had too much influence in conflict and wars around the world, the survey found."  Just over half of those polled said that Israel has a right to exist as a Jewish state -- with an alarming number of people blaming Jews and Israel for anti-Semitism, and many vastly overestimating the Jewish population in their home countries:

Regarding Israel, 54% of Europeans said Israel has a right to exist as a Jewish state, and the figure jumped to two-thirds in Poland. Around a third of respondents said that criticism of Israel tends to be motivated by anti-Semitism, while 21.5% said it is not. Over a third, 35%, said that Israel uses the Holocaust to justify it actions, and half of those in Poland agreed. One in five disagreed. More than a quarter, 28%, said anti-Semitism in their countries was a response to the actions of Israel and 18% said anti-Semitism was a response to behavior by Jewish people...Respondents from minority groups tended to blame Israel and Jews for anti-Semitism... Estimations of Jewish populations were far off the mark, the CNN survey found. Two-thirds of respondents overestimated the percentage of the world that is Jewish, and the same for the fraction of the population in their own countries. A quarter of Hungarians guessed 20% of the world is Jewish, and one-fifth of British and Polish put the figure just as high. Overall, 16% of Europeans think that Jews make up more than 20% of the world’s population. In fact 0.2% of the world is Jewish according to Pew Research Center’s Global Religious Landscape study. Israel is the only country in the world that has a more than 2% Jewish population.

My host for the holiday weekend, US Ambassador to Germany Richard Grenell, responded to Klein's backwards recommendation with a call to solidarity and action -- urging Germans to show unity with their Jewish neighbors. This is exactly right:

The opposite is true. Wear your kippa. Wear your friend’s kippa. Borrow a kippa and wear it for our Jewish neighbors. Educate people that we are a diverse society. https://t.co/vd9nV9AvPG

On a lighter, Grenell-related note, take a look at what's hanging in the foyer of his ambassadorial residence in Berlin:

Grenell tells me the piece was painted by an East German artist -- an admirer of the president -- who surprised him with the enormous portrait when he visited the house for dinner.

UPDATE - This is a wonderful response from Germany's largest newspaper:

Front Page of Germany’s @BILD newspaper tomorrow - a Do It Yourself Kippa for everyone to wear. https://t.co/RdS42VwoFQ