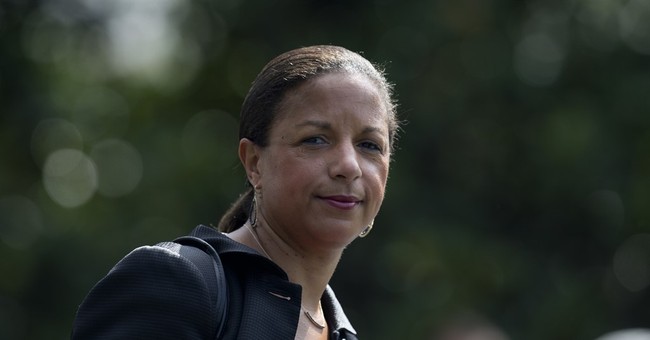 Just the opposite of what we've heard from Devin Nunes, unnamed current US officials who spoke with reporter Eli Lake, and former US officials familiar with the unmasking process and protocols. They all at least hinted, or stated outright, that Susan Rice's numerous requests to unmask the names of Trump-tied figures whose communications were incidentally intercepted by American intelligence agencies were suspicious, unusual, and possibly improper. Nunes and other anonymous sources said that the conversations in question had nothing to do with Russia, suggesting that they did not appear to merit the sort of legitimate national security scrutiny that would justify unmasking requests. Now CNN has spoken with (again unnamed) sources in both parties who say that the classified documents in question do not show anything out of the ordinary or reveal any wrongdoing by the previous administration in connection with the unmasking:

After a review of the same intelligence reports brought to light by House Intelligence Chairman Devin Nunes, both Republican and Democratic lawmakers and aides have so far found no evidence that Obama administration officials did anything unusual or illegal, multiple sources in both parties tell CNN...over the last week, several members and staff of the House and Senate intelligence committees have reviewed intelligence reports related to those requests at NSA headquarters in Fort Meade, Maryland...One congressional intelligence source described the requests made by Rice as "normal and appropriate" for officials who serve in that role to the president. And another source said there's "absolutely" no smoking gun in the reports, urging the White House to declassify them to make clear there was nothing alarming in the documents. Still, some members of Congress continue to have concerns about the justification given for the unmasking requests and the standards for the intelligence community to grant such requests, which reveal the private data of US persons mentioned in intelligence reports based on routine intelligence collection aimed at foreign nationals.

Whom to believe? A few thoughts:

(1) I'm still stuck on Susan Rice's initial dishonest answer in that PBS interview weeks ago that she had knew "nothing" about the unmasking of Trump officials, only to reverse her story after Nunes came forward.  She is not a trustworthy or credible actor, a reality about which we've been reminded yet again just this week.

(2) Could the exact same documents raise red flags among some observers, while eliciting shrugs among others? Is it not "unusual" to request unmasking the identities of American citizens connected to the transition team of an incoming administration? Wouldn't there need to be a very clear national security interest at stake? Nunes and others say or speculate that bar wasn't met; CNN's sources say everything looks pretty normal. Which is it?  Former CIA Director Michael Hayden offers a modest recommendation to help put this issue to rest.  It sounds pretty fair to me:

A group of trusted agents — perhaps a bipartisan group of respected former security and intelligence officials — could make quick work of the task and deliver a verdict in short order and we would put this affair behind us. Of course, that assumes that all parties want a resolution to this issue, rather than a festering, distracting political fight.

(3) Saying that there's "absolutely" no 'smoking gun' against top Obama aides is not necessarily the same thing as concluding that the alleged basis for the unmasking -- especially given the politically-charged context -- was totally appropriate or innocent.  The final bolded portion of the CNN piece excerpted above indicates that some lawmakers aren't satisfied with what they're seeing on this front.

(4) President Trump was premature and reckless to muse that perhaps Ms. Rice had committed a crime; there is no evidence to support that proposition. There is still the matter of those national security leaks, of course, which were clearly designed to undermine Trump's presidency; their dissemination was also a crime. Someone is responsible for those -- likely more than one person. And it's not a stretch at all to suggest that culprits very well could be forces loyal to Obama and hostile to Trump with access to that sort of information.  This matter must be investigated, too.

(5) Let's not forget that Russia's established efforts to meddle in our election is still the subject of multiple active probes, at least one of which is explicitly looking into the potential complicity of anyone in Trump's orbit.  That's why this revelation could end up being significant.  Then again, once a FISA warrant was granted against a Trump adviser, the DOJ would have gone to work trying to flag any inappropriate or criminal conduct.  No charges have been filed, and no bombshells have found their way onto any front pages, so Allahpundit's analysis rings true:

Had that warrant produced relevant evidence of a crime, does anyone doubt that it would have emerged by now? It only took a few weeks for the outgoing administration to leak the transcripts of Michael Flynn having a perfectly reasonable conversation with Russian ambassador Sergei Kirlyak during the transition. That leak that itself was illegal, and aided by an unusual rule change that allowed for much wider dissemination of unredacted transcripts involving US persons. The warrant in this case went for at least 180 days, and maybe longer, as the WaPo notes that it was renewed “more than once,” so it’s not as if they didn’t have lots of opportunity to put together an indictment — or at least some factual basis for suspecting collusion that insiders would have loooved to leak.

That's really tough to argue with. So where does all of this leave us? Partisans on both sides are heavily invested in dueling scandals: Liberals are convinced that the Trump campaign coordinated with the Russians to beat Hillary Clinton. But there's no evidence of that yet, even amid a swirl of speculation and carefully-worded innuendo. Conservatives believe that the Obama administration improperly monitored Trumpworld, then selectively leaked classified information to make the new president look bad. Some of those leaks certainly happened, but we don't know by whom, and we can't pin any of it on Team Obama yet. Thus, Lake's admonition that there might be one, two, or zero bona fide scandals here seems reasonable. Both lines of inquiry should be pursued aggressively, and resolved as soon as possible.