Gallup: And the Word Most Associated With Hillary Clinton is... 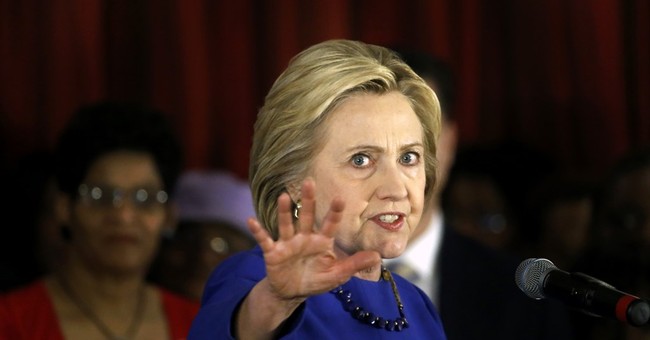 According to a new national survey conducted by Gallup, Hillary Clinton has earned quite a reputation for herself. The polling outfit asked more than 1,000 randomly-selected American adults (not even registered voters) to say the first word that they associate with Mrs. Clinton. The results: 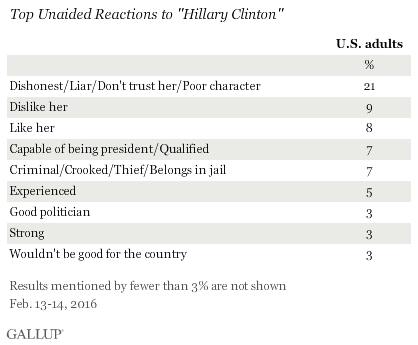 Phrases and descriptors questioning her honesty and integrity amount to a clear plurality, followed by personal dislike.  In total, clearly negative responses outweigh positive ones by a margin of 40 percent to 26.  (For what it's worth, free responses on Bernie Sanders were more diffuse, with the top responses being Socialist and old).  When you couple this data with numbers from a recent Quinnipiac poll, a picture emerges of a gravely flawed candidate.  This is the woman the Democratic establishment is stacking the deck to nominate:


The only remaining candidate with favorability numbers that weak is Donald Trump. His overall rating is virtually identical to hers; he performs significantly worse among women and young people, but slightly better with independents. The same nationwide survey shows Clinton trailing every Republican polled (she's down eight to Kasich, seven to Rubio, three to Cruz) -- except for Trump, whom she leads.  Back to her profound vulnerability, based on baked-in fundamentals.  How's this for predictive data?

Here is how Hillary's favorability rating compares to every nominee since 1992 pic.twitter.com/4pxRE0J1AV


Just to put a finer point on it, Hillary Clinton can absolutely be defeated, and there may be only one potential Republican nominee who is unpopular enough to snatch defeat from the jaws of victory.  He is leading in the polls and will be nominated if something doesn't happen soon.

UPDATE - I discussed this poll with Gretchen Carlson this afternoon and offered my own one-word descriptors of Clinton and Sanders. Via RightSightings: