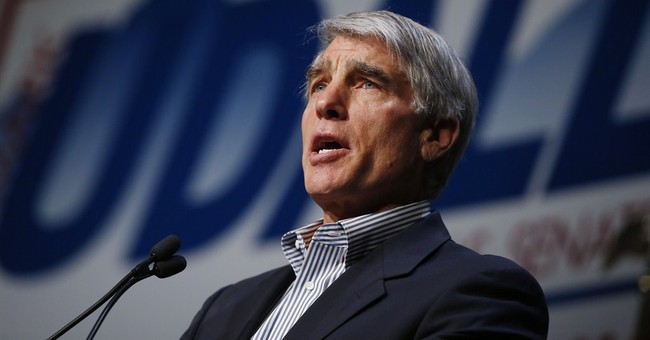 Come for his answer on Common Core ("yes"), stay for his avert-your-eyes inability to answer lighthearted softball questions about books and music -- via John Ekdahl:


He's got most of the policy stuff nailed: Keep Obamacare? Check. Gun control? Check. Path to citizenship? Check. Opposition to the death penalty? Check. Opposition to the 'personhood' amendment? Check. More regulations on fracking? Check. Was his answer on Common Core an endorsement of the program, or a rejection of it?  Yes. Keep in mind that this is a man running for re-election in a purple state who's still trying to position himself as a moderate and the White House's worst nightmare, or whatever. Setting aside his record of voting 99 percent of the time with the president, would O himself have answered any of those policy questions differently? Maybe he'd have hedged a bit on the death penalty, which would place Udall to Obama's left.  No wonder Udall couldn't name a single Obama proposal he opposes when pressed to do so during a recent debate.

But I'm mystified by the consecutive blown lay-ups on books and tunes.  Udall goes the safe route with with JFK's Profiles in Courage, then…can't call to memory two other books -- any two books he's ever read -- that have influenced him.  Everyone knows what a brain freeze feels like, but "I'd have to really think about which books have influenced me the most" is surely preferable to, "um, the, uh, let me think.  We can play this over, right?  Let me re-tape this."  When the interviewer bails him out by re-lobbing the music question (basically, name any song in the universe, Senator), Udall throws in the towel.  "Uh, I'm brain dead today," he says with a sheepish grin, before finally recovering and spitting out a few answers at the end of the clip.  George Will's Friday column featured the Colorado race, and accused Udall of treating women as "civic illiterates:"


One Democrat whose gallantry toward women is monomaniacal, Sen. Mark Udall (Colo.), is now uncomfortably known here as “Mark Uterus.” He is seeking a second term by running such a relentlessly gynecological campaign that the Denver Post, in endorsing his opponent, Rep. Cory Gardner, denounced the “shocking amount of energy and money” Udall has devoted to saying that Gardner favors banning birth control. Actually, Gardner favors over-the-counter sales of oral contraceptives. In addition to being common sense, Gardner’s proposal is his way of making amends for formerly advocating a state constitutional “personhood” amendment (it is again on the ballot this year and will be decisively rejected for a third time) and for endorsing similar federal legislation that has zero chance of passage. By defining personhood as beginning at conception, these measures might preclude birth control technologies that prevent implantation in the uterus of a fertilized egg. On this slender reed, Udall leans his overheated accusations that Gardner is bent on “trampling on women’s rights,” is on a “crusade” for “eliminating” reproductive freedoms and would “outlaw birth control.”

Gardner, 40, cherubic and ebullient, is a human sunbeam whose unshakable cheerfulness is disconcertingly authentic as he exclaims to the waiter at breakfast, “Thank you for your work this morning!” A fifth-generation Coloradoan who lives in a prairie town in a house once owned by his great-grandparents, Gardner is amused by an anomaly: “Udall looks like the Republican in this race — dour and angry.” When Gardner ran an ad saying Udall is “a real nice guy” but too much a creature of Washington to change it (Udall’s father, an Arizona congressman, ran for president; Udall’s uncle was an Arizona congressman and interior secretary; Udall’s cousin is a senator from New Mexico), Udall, in high synthetic dudgeon, called the ad a reprehensible attack on his family. Which elicited this puckish headline in the Washington Examiner: “Cory Gardner calls Mark Udall ‘nice guy’; Democrats want ad pulled.”


Will praises Gardner for his open-mindedness, adding in a dig at the 'Mark Uterus' campaign: "In order to change your mind, you have to have one. The 'war on women' incantation is mindless — a substitute for thought."  Ouch.  If Democrats want a late game-changer in this contest (and polling suggests they might need one), perhaps they can leak some additional garbage 'scoops' to Gawker-owned sports blogs about Cory Gardner's grade school career.  One of them might eventually stick, or at least serve as a diversionary tactic to draw attention away from this story.  I'll leave you with Gardner's latest ad, starring his grandmother:


Protect "every penny" of Medicare benefits for current and soon-to-be seniors, and reform the troubled program to preserve it for future generations.  That's right, Gardner just took a (good-natured, upbeat) shot across the 'MediScare' bow in the closing weeks of the campaign.

Editor's Note:  A version of this piece is cross-posted at HotAir.com