We've entered the 2014 midterm election season's home stretch, and the latest round of national polling depicts a highly favorable climate for Republicans -- at least on paper.  Consider the data we've seen in the last week alone:


- The Politico / GWU Battleground poll showed Republicans +4 on the generic ballot, with a double-digit lead in states with competitive Senate races.  The survey indicated the public trusts Republicans more than Democrats on the economy, spending, foreign policy and immigration -- all of which are marquee issues.  And Republican voters are more enthusiastic to vote than Democrats, with an "intensity advantage" that surpasses 2010 levels, according to the pollsters.

- The Washington Post / ABC News poll (featuring a whopping D+10 sample) has President Obama plunging to new lows on leadership and foreign policy, with a majority of voters disapproving of his overall job performance and describing his presidency as a failure.  Republicans have a three-point generic ballot lead among the likeliest voters (though this survey bucks the trend with a modest Democratic enthusiasm advantage), and lead among independents by 12 points.  The generic ballot is virtually deadlocked among registered voters, prompting this historical note from the pollster: "As a rough guide, when the Democrats lack a double-digit lead among registered voters in the generic matchup, they’re at some risk."  They not only lack a double-digit lead; they're tied among registered voters (most pollsters are now using likely voter screens), with a heavily Democratic partisan sample.

- A Kaiser Family Foundation poll confirms that twice as many Americans say they've been personally harmed by Obamacare than helped.  By an 11-point margin, voters say they're more likely to back a candidate supporting the repeal of Obamacare; voters also say they're less likely to elect a candidate who supports President Obama's agenda by a 16-point margin.  The survey shows a tie on the generic Senate ballot among likely voters, with Republicans opening up a significant enthusiasm gap.

- The Wall Street Journal / NBC News poll pegs Republicans' generic ballot lead at two points with registered voters, an edge that blossoms to 10 points in states with contested Senate races. The GOP leads significantly on key issues: The economy, foreign policy, deficits, taxes, immigration and national defense.  The party's 10-point lead on the economy is its largest in nearly two decades in this polling series.  The president remains mired at an all-time low in the series (-14).

Clearing away all the internal nuggets, these two charts spell out the bottom line.  Presidential approval in the low 40's with majority disapproval, and Republicans catching up with (if not overtaking) Democrats on the generic ballot question -- which, as noted above, typically favors Democrats: 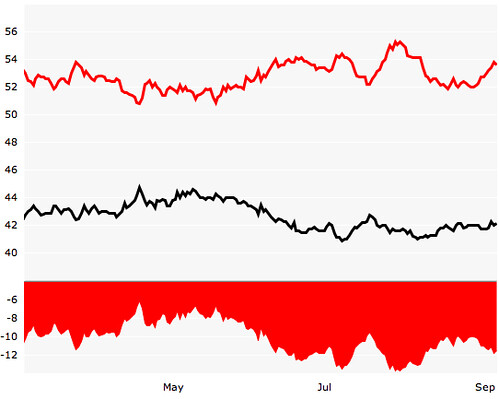 The GOP has made gains in the generic ballot on RCP this month, and the oldest poll in there is the Dems best one. pic.twitter.com/2tAC1OP5cV

Newly-minted Meet the Press moderator Chuck Todd told the Morning Joe crew this morning that Obama is "on the precipice of doing Jimmy Carter-like damage to the Democratic brand" on foreign policy.  And yet, the polling in many individual races doesn't appear to reflect the national tide.  It's true that a recent slew of Senate polls showed Republicans holding at least nominal leads in eight contests for Democrat-held seats, while retaining all currently-red seats.  But several of those match-ups were within the margin or error, and quality Republican candidates in purple states like Iowa, Colorado and New Hampshire are at best tied at the moment, if not slightly behind.  If historical trends and the fresh numbers recapitulated above project a modest-to-large red wave in 2014, how can Sen. Mark Pryor be  within striking distance in Arkansas? (Four years ago, the Democratic incumbent in his state got blown out).  How is Sen. Kay Hagan virtually tied in a state Mitt Romney carried in a fairly strong Democratic year?  How is Wisconsin Governor Scott Walker locked in a dog fight after expanding his 2010 victory margin in the high-turnout 2012 recall election?  I asked Real Clear Politics senior elections analyst Sean Trende to help unravel this apparent disconnect, and he reasoned that while the current national climate is "not inconsistent with a big Republican year," crucial factors like turnout, engagement and undecided voters are just now starting to shake out.

"This could be shaping up as a perfect Republican storm," Trende says of the emerging national numbers.  "If you look at the 2010 generic ballot, up until July [of that year], things were knotted up between Democrats and Republicans. Then Republicans took off, and Democrats stayed at around 43 percent.  That was a high interest election, so we shouldn't be surprised that people 'broke' earlier than usual. This year doesn't have the same overall intensity, so I think it's following the more traditional pattern of people engaging after Labor Day," he says.  In late September of 2010, Republicans held a three-point lead on the generic ballot in RCP's poll aggregator. By election day, that gap had widened to nine-plus points.  The GOP ended up winning the election by about seven points. "These [2014] Senate races are just now really beginning to engage, and undecided voters are starting to get a look at the Republican candidates," Trende explains. "That doesn't mean they're going to like what they see in every case, but the fact that you still have about 15 percent of the electorate undecided in a place like Iowa suggests that we will eventually see a clear break for one candidate or the other. It's possible that [undecided voters] will break evenly, but I wouldn't bet the farm on that."  For an explicit data point on how undecideds might 'break,' Trende mentions a recent Arkansas survey conducted by Democratic pollster PPP: "They polled undecided voters and found that Obama's job approval rating among that group, in that state, is 13 percent. So we'd expect those people to break disproportionately toward [Republican challenger Tom] Cotton."

When people tune in to races, who does and does not cast ballots, and how undecided voters ultimately break are the X factors that are just now starting to take shape.  The question is whether those are lagging indicators that will catch up with and confirm the picture that national polls appear to be painting.  Returning to the subject of 'undecideds,' Trende raises presidential approval ratings as an instructive factor: "Most of these vulnerable Senate Democrats' vote shares [in polling] roughly correlate to the president's job approval rating. So you have this mass of undecided voters who don't think much of the president, but haven't decided to vote for a Republican. In states like Louisiana or Alaska, the most reasonable expectation is that a lot of those people eventually move toward Republican candidates," he says, adding that the same pattern could hold true in those purple state races, but with a less dramatic split.  Applying his historical presidential approval rating model, Trende projects a GOP net gain of seven or eight Senate seats in November -- which falls in line with the stated expectations of other top prognosticators.