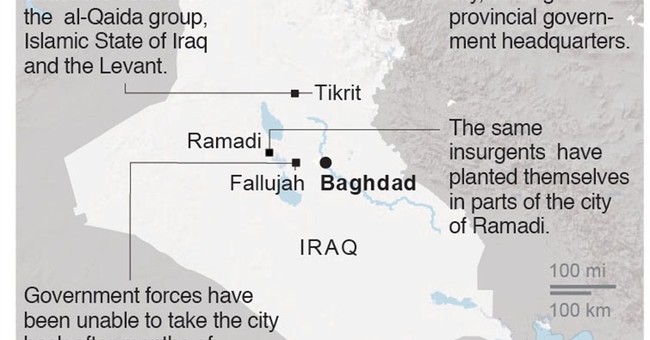 If you've been reading our Iraq updates, you already know why POTUS is considering this move, as radical Islamist terrorists advance on Baghdad. The situation on the ground has has gotten extremely dire in recent days, with a well-equipped and fervent Al Qaeda splinter group seizing control of major Iraqi cities. US embassy staff is reportedly prepping an evacuation plan if the worst should come to pass. American airstrikes against ISIS militants wouldn't require unilateral action; according to multiple reports, the Iraq government has been effectively begging for air support for months. So far, they've been thoroughly rejected by Obama administration officials (see update below):


As the threat from Sunni militants in western Iraq escalated last month, Prime Minister Nuri Kamal al-Maliki secretly asked the Obama administration to consider carrying out airstrikes against extremist staging areas, according to Iraqi and American officials. But Iraq’s appeals for a military response have so far been rebuffed by the White House, which has been reluctant to open a new chapter in a conflict that President Obama has insisted was over when the United States withdrew the last of its forces from Iraq in 2011. The swift capture of Mosul by militants aligned with the Islamic State of Iraq and Syria has underscored how the conflicts in Syria and Iraq have converged into one widening regional insurgency with fighters coursing back and forth through the porous border between the two countries. Hoshyar Zebari, Iraq’s foreign minister, last year floated the idea that armed American-operated Predator or Reaper drones might be used to respond to the expanding militant network in Iraq. American officials dismissed that suggestion at the time, saying that the request had not come from Mr. Maliki. By March, however, American experts who visited Baghdad were being told that Iraq’s top leaders were hoping that American air power could be used to strike the militants’ staging and training areas inside Iraq, and help Iraq’s beleaguered forces stop them from crossing into Iraq from Syria...In a May 16 phone call with Vice President Joseph R. Biden Jr., Mr. Maliki again suggested that the United States consider using American air power. A written request repeating that point was submitted soon afterward, officials said.


They've asked every which way, and the nature of the threat is more urgent than ever. At least one unnamed US official tells AFP that "Washington was considering several options for offering military assistance to Baghdad, including drone strikes." President Obama is in a quandary. On one hand, killing loads of Al Qaeda-type terrorists from the air has become a signature tactic of his, and he's always insisted that the Iraq war was a distraction from the real fight against Al Qaeda. Regardless of one's view of the Iraq conflict -- at the time, or in retrospect -- it's abundantly clear that Iraq and Syria have become ground zero in the fight against an shockingly malignant and increasingly powerful strain of radicals. Syria presents a complicated scenario because Obama has vocally demanded the ouster of Bashar al-Assad, who's actively fighting Al Qaeda in his ruthless struggle to retain power. He's used (and is still using) chemical weapons in this battle, which crossed the president's unenforced "red line." Our official policy is that "Assad must go," even though the people who might supplant the Iranian puppet regime could arguably be even worse. Given that backdrop, it's unsurprising that the Obama administration would prefer not to engage in that country at all, with the exception of backing some vetted anti-Assad fighters. In Iraq, though, there's a cleaner case to be made: Help the Iraqi government beat back a terrible threat, kill Al Qaeda fighters, and protect the last vestiges of stability that were secured at great cost by the US military. Obama could do so with zero boots on the ground, and could partially make up for his administration's inexcusable Status of Forces Agreement whiff (for which the Maliki government certainly bears some responsibility), which has indisputably contributed to the current crisis.


But there's another looming factor in this calculus: Politics. Barack Obama successfully ran for president as a leader with the foresight to oppose the Iraq intervention from the beginning. He was hellbent on "ending" that war at all costs, buoyed by broad support among the American people, and therefore has little appetite to re-engage in Iraq in any capacity. The public likely wouldn't be too keen on the idea, and his base would absolutely despise the move. To that end, Noah Rothman notes the decidedly mixed reviews so far from Congressional Democrats regarding the possibility of a contingency plan involving airstrikes. In the face of very weak polling numbers, Obama and his party can ill afford to infuriate their base in advance of an election that is already likely to result in Republican gains. Helping the still-fledgling Iraqi government hold off these barbarians is unquestionably the correct course of action, but the politics are hugely problematic. Obama's Commander-in-Chief duties are in direct conflict with his Democrat-in-Chief role. We'll see what, if anything, he does. I'll leave you with this image:

More US made humvees taken from Iraq to #Syria by ISIS --> pic.twitter.com/zQUDfalfSB


UPDATE - This is promising:


"We do have a stake in making sure that these jihadists are not getting a permanent foothold in either Iraq or Syria." - Obama

“There will be some short-term, immediate things that need to be done militarily.” – Obama on Iraq


The Iraqi air force is bombing terrorist strongholds in Mosul, which fell to ISIS this week, and "thousands" of Iraqis have heeded the government's call to join the fight against the radicals. Some strategic US help could be enormously helpful. A key Democrat isn't ruling out US airstrikes.


UPDATE II - Wow. Has this terrorist offensive been in the works for two years? And is it being led by former Baathist commanders from the Hussein regime? Stunning developments in the New York Times.

UPDATE III - Enter Iran. This is a big deal:

Lawmakers ‘Held Hostage’ In Arizona Capitol
Sarah Arnold
Bill Maher Knows Where Progressives Are Going to Blow It on Abortion
Matt Vespa
Did a Co-Host for 'The View' Really Use Her Disabled Family Members to Defend Upholding Roe?
Matt Vespa
Dobbs Decision is a Crucial Reminder of How Much the 2016 Election Mattered
Rebecca Downs
Joe Biden Signs Gun Legislation Bill into Law
Sarah Arnold
Jean-Pierre Insists Biden is Not to Blame for Inflation
Sarah Arnold
CARTOONS | Al Goodwyn
View Cartoon
Most Popular