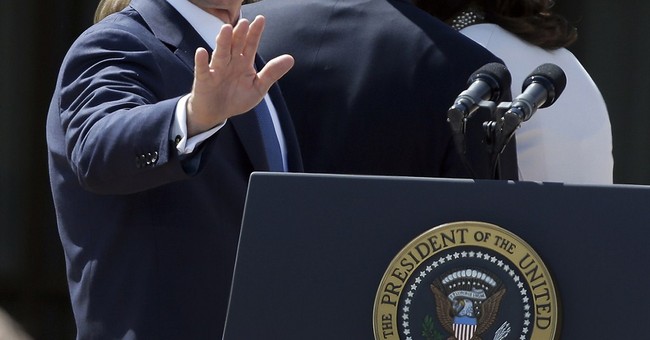 Let's begin with some requisite caveats: Word clouds aren't necessarily the most precise form of polling, and the two leaders' shared characteristics weren't presented to respondents in a head-to-head format.  Nevertheless, for a guy who was elected as a sophisticated, nuanced, long-awaited "lightworker" after the dark and unspeakable years of Bush, President Obama doesn't exactly stack up all that favorably against the predecessor he's blamed for virtually everything under the sun:

The word "incompetent" is a popular word for both, though Obama just edged Bush in those references, 27-26.

And "liar" also appears high on both the Bush and Obama list, with Obama collecting the most, 18-13.


On the eve of his presidential library opening in Dallas this past spring, Bush's job approval rating had recovered to 47 percent -- a double-digit improvement since he left office.  A poll out last week pegged Obama's approval rating at 43 percent.  And for a guy who was once accused by a prominent "jackass" of not caring "about black people," the Washington Post reports that Bush and his policies are badly missed...in Africa:


Across this continent, many Africans wish Obama was more like Bush in his social and health policies, particularly in the fight against HIV/AIDS — one of the former president’s signature foreign policy aid programs. Bush poured billions of dollars into the effort to combat the spread of the disease that once threatened to consume a generation of young Africans, and as Obama has spent two days touring South Africa, the shadow of his predecessor has trailed him. For Obama, the success of Bush’s program has proved a tad awkward, as he has been mindful to praise his predecessor even as he tries to push forward on his administration’s own plans for new programs based on private investment from U.S. businesses. Flying to South Africa from Senegal this weekend, Obama told reporters that Bush “deserves enormous credit” for the fight against HIV/AIDS, acknowledging that the program likely saved millions of lives.

In South Africa, the success was extraordinary. AIDS killed roughly 2.3 million in South Africa — once one of the worst-affected countries in the world — and orphaned about a million children there, according to the United Nations. Today, rates of infection have fallen to 30 percent, and nearly 2 million people are on antiretroviral drugs. “Knowing that Africa has many challenges, with fighting AIDS being one of the biggest challenges, we were really expecting President Obama to continue where President Bush had left off,” said Hilary Thulare, country director of the AIDS Healthcare Foundation, a Los Angeles-based nonprofit group that works in 26 countries providing medical care to people with AIDS. “But it’s been a disappointment. Obama is retreating on AIDS and, by this, retreating on Africa.”

It was Bush's commitment to committing life-saving resources to the AIDS-ravaged continent that moved liberal Ellen Ratner to write a column entitled, "George W. Bush Has Saved More Lives Than Any American President:"


George W. Bush, not Barack Obama, is the real American hero in Africa. Take it from me, a liberal Democrat who voted for Obama twice. I know a little about Africa: I have been to the continent 17 times over the last 32 years.  In particular, I have a great interest in South Sudan; I first traveled there in March 2008, and I have been back 13 [times] since. For five years, now, I have entranced and, yes, haunted by the land and its people. The land is so beautiful, the people are so friendly.  And yet they are plagued by many challenges. And some Americans have really stood up to help--most notably, the 43rd President, George W. Bush....Yet now that Obama’s first term has drawn to a close, the positive buzz about Obama has dramatically shifted; the Obama excitement, and the T-shirts, have most disappeared. In fact, South Sudanese today are thinking more about another U.S. president: that would be Obama’s predecessor, Bush 43. As an...Obama supporter, I was particularly struck by this. Yes, Bush is a hero in Africa, and Americans, too, should know why. No American president, before or since, has had Bush’s vision and determination to save so many millions of lives.

Not bad for an clueless-slash-evil war criminal from a supposedly racist and callous party, or whatever.