Awesome: 'War on Women' Crashes and Burns in Australia 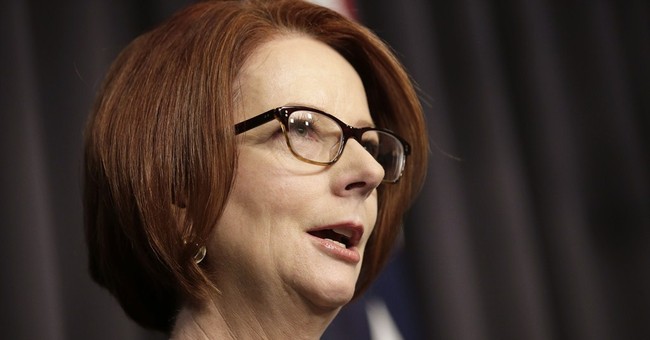 The dust is still settling in the Australian capital of Canberra, where former Prime Minister Kevin Rudd ousted his successor and bitter rival Julia Gillard last week, in advance of fall elections.  Gillard executed a ruthless intra-party coup against Rudd in 2010 -- now he's returned the unwelcome favor.  Both are members of the embattled left-wing Labor Party, which has been lagging behind in polls for months:


Kevin Rudd has ousted Prime Minister Julia Gillard as leader of Australia's Labor Party. He won by 57 votes to 45, in a leadership ballot of Labor lawmakers. The change comes ahead of a general election due in September, which polls suggest Labor is set to lose. This is the latest twist in a long and bitter rivalry between the two politicians - but it could be the last as Ms Gillard has said she will now leave politics. "I will not re-contest the federal electorate... at the forthcoming election," said Ms Gillard, Australia's first female prime minister.


As the conservative opposition -- led by the Liberal Party's Tony Abbott -- accumulated its sizable lead, Gillard turned to a full-blown "war on women" narrative in an attempt to salvage her fate.  Her cynical plot failed spectacularly:


Australian Prime Minister Julia Gillard’s attempt to marginalise the opposition by claiming it would change abortion rights and sideline women has backfired with a poll yesterday showing male voters are deserting her. Gillard, the country’s first female leader, last week reignited a simmering gender war by saying in a speech that government would be dominated by “men in blue ties” should opposition leader Tony Abbott assume office in September elections. “It’s a decision about whether, once again, we will banish women’s voice from the core of our political life,” said the embattled prime minister in the speech, desperate to shore up waning support. “We don’t want to live in an Australia where abortion again becomes the political plaything of men who think they know better.” But the ploy has backfired with a poll in Fairfax Media showing male voters are abandoning Gillard and the Australian Labor Party (ALP) and there is little sign of more women getting behind her. The telephone poll of 1,400 voters found that since the last survey a month ago Labor’s standing has continued to slide, led entirely by a seven percent exodus of men. Under a two-party vote, the conservative opposition would romp home in the September 14 elections with 57 per cent (up three points) to 43 per cent (down three points) for Labor.

A subsequent public opinion survey confirmed this trend, with Abbott pulling nearly even with Gillard among women.  A total backfire.  Gillard's "gender war" nonsense couldn't even save her political skin within her own lefty party.  New, post-upheaval polling reveals a bump for Rudd and Labor following Gillard's ouster, but the conservative opposition continues to lead Down Under.  Australian voters exhibited the clarity and maturity to reject desperate gender-based political appeals; will Americans catch up with the Aussies on this score?  As an aside, Australia's politics are currently several steps to America's left on the issue of abortion, whereas both prominent Australian parties oppose changing the nation's laws to include same-sex marriage.  I'll leave you with this bonus clip of Labor's new/old leader riding the struggle bus while trying to record a short video statement (*content warning*):