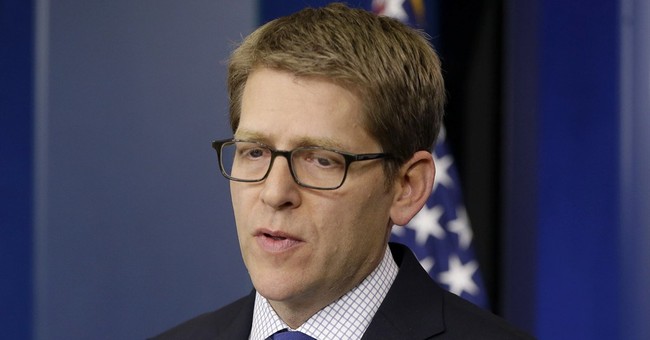 During today's contentious press briefing, White House spokesman Jay Carney categorically denied that anyone inside the White House knew about the IRS' policy of applying heightened scrutiny to conservative organizations prior to late April of this year.  Minutes later, he was forced to walk back his own assertion, instead claiming that he personally was "not aware" of anyone at the White House having knowledge of that IRS practice:

This was a significant and telling mistake.  The only straight answer of the afternoon was hastily revised under antagonistic questioning from a skeptical press corps.  This looks sloppy and slippery at best, suspicious at worst.  Former White House Press Secretary Ari Fleischer explains how and why Carney made a serious misstep:

How can Jay say w certainty no one at WH, or on political staff, spoke w IRS?Has he interviewed everyone? Who did he ask?

I tried to warn Jay (in an earlier tweet). " Did anyone know" is an impossible question. Jay fell into the trap.


Some things still don't add up here.  The "inappropriate" IRS policy was in place for years (and was coincidentally instituted just as the national debate over Obamacare reached a fever's pitch), prompting gales of protest from the targeted groups.  Carney says the White House never asked if the complaints were well-founded, even as they were being reported in the press.  If that's true, why not?  Carney also claims the White House was finally briefed about the brewing scandal in April, but no one bothered to tell the president, who supposedly first saw the story in the media on Friday.  This strains credulity.  A hyperpolitical abuse-of-power bombshell was about to fall out of the sky onto the president's domestic agenda, and the White House was given a three weeks of advanced notice -- but nobody informed the boss?  Finally, if the president's team didn't have any inkling of impropriety regarding the IRS, tax records and political opponents, how did a senior Obama administration official come to know confidential details about the tax status of political lightning rod Koch Industries in late 2010, after the IRS began targeting conservatives?