The Right To Get High: Pot vs. Tobacco; UPDATE: Pot vs. Alcohol

Greg Hengler
|
Posted: Oct 21, 2009 3:06 PM
Share   Tweet
It's a little noticed paradox: This push to impose more restriction on cigarettes while simultaneously liberalizing access to so-called "medical" marijuana. Fortunately, there's broad consensus on the dangers tobacco poses to your heart, lungs, skin, bones, brain and even reproductive health. Yet marijuana smoke is far more carcinogenic and damaging to lungs; but it's dubbed "medicine," which is supposed to treat, not promote disease. Consider these stats:

* One marijuana joint is as damaging as seven cigarettes.

* The tar (condensable residue in smoke) from marijuana has 50% more carcinogens than tobacco tar.

* Regular cannabis smokers can develop lung problems as much as 20 years earlier than their tobacco smoking counterparts. On average, pot smokers developed lung disease by 41 years of age, vs. 65 years of age for tobacco smokers. 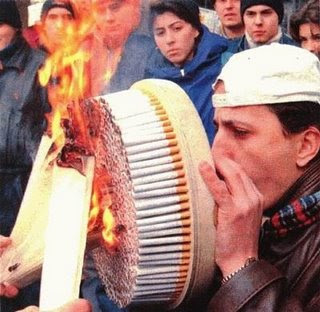 Characterizing cannabis as medicine rather than the addictive toxic drug it is recalls efforts to promote beer to nursing mothers or even market cigarettes themselves as cough-suppressants. Live and let live, but meanwhile let's not kid ourselves -- or others -- about the health impact of such lifestyle choices. It's time to clear the smoke.

UPDATE: After reading your comments I will respond to one of the common challenges posed when it comes to this reefer debate. Now, I understand that the commonness of common sense is too quaint and obsolete for the colorful, mind-expanding world dope-heads of all ages live in, but please bear with my black and white question.

For those who argue that dope (smoked or eaten) is safer or just as dangerous as alcohol, here's my question: Would you rather have a commercial pilot flying your family across country smoke a joint (or, how about simply taking one toke) or drink a glass of wine before they got in the cockpit?

That is all. Back to your peaceful bong circle. No worries.