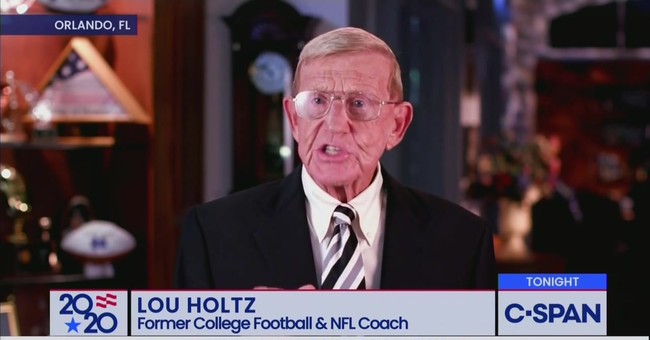 On Wednesday night 'The Coach' Lou Holtz shared his enthusiasm for President Trump and his long-held method for picking the winners and playing smart. The 83-year-old College Football Hall of Fame coach, who ushered teams to victory over four decades, said that to him, supporting Trump was one of the easiest life choices he's ever made.

"It is a pleasure, a blessing, and an honor for me to explain why I believe that President Trump is a consistent winner, an outstanding leader, and deserves to be re-elected as our President," Holtz said. He talked about his humble beginnings and taking ownership of his own decisions, thanking his parents for the lessons.

"They taught me that life is about making choices. Wherever you are, good or bad, don’t blame anyone else. Go get an education. Get to work," he said. "You can overcome any obstacles and always remember, that in this great country of ours - anyone can amount to something special."

He referenced his core values, the tenets of life which lead him to each decision he makes. On the statue of Holtz at the University of Notre Dame, where he coached for ten years, three words simply describe Holtz's commitment to his life standards: trust, commitment, and love.

"All my life I’ve made my choices based on these three words," he said. "I used these three rules to make choices about everything – my beloved wife of 59 years, athletes I coached, and of course politicians, even President Trump."

Holtz said the trust he has in the president comes from many of his actions but one of the most important elements of Trump's presidency has been his commitment to the protection of the unborn.

"Nobody has been a stronger advocate for the unborn than President Trump," Holtz said. He then blasted the Democratic ticket for supporting unfettered access to abortion at any time in the baby's life inside the womb.

"The Biden-Harris ticket is the most radically pro-abortion campaign in history," Holtz said, further pointing out that pro-abortion policy stances go specifically against the teaching of the Catholic church.

"They and other politicians are 'Catholics in Name Only' and abandon innocent lives. President Trump protects those lives," Holtz said.

Biden has maintained that he is a "devout Catholic" who attends mass and carries a rosary while also advocating for legal abortion for all, even supporting the repeal of the Hyde Amendment, which bans federal subsidization of abortions. He previously supported the ban, but in his lurch toward the far-left, he changed his mind and said he would repeal it.

Joe Biden was denied communion during a campaign stop last year because of his pro-abortion pronouncements.

Holtz said that Trump also fulfilled his second two qualifications questioning whether the candidate he supported was doing their best and if they truly cared about others.

"President Trump has demonstrated through his prison reform, advocating for school choice, and welfare reform that he wants Americans from all walks of life to have the opportunity to succeed and live the American dream," he said.

It was a different story for the Democratic nominee, however.

"If I apply this test to Joe Biden – I can’t say yes to any of these three questions."

The Coach said he used to ask his players at Notre Dame a simple question to inspire them to be their absolute best.

“If you did not show up who would miss you and why?” Holtz said he asked his team.

"Can you imagine what would happen to us if President Trump had not shown up in 2016 to run for president? I am so glad he showed up. Thank you for showing up Mr. President!"