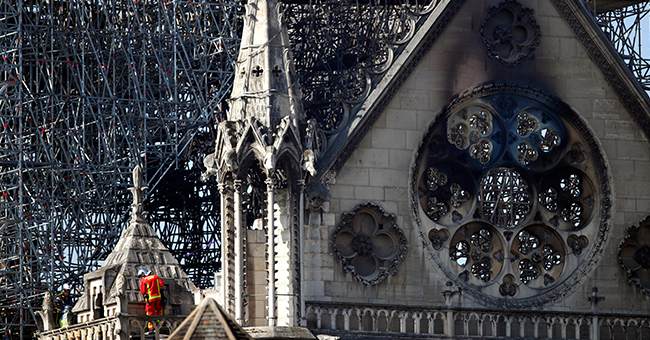 Almost exactly a year after a devastating fire ravaged the centuries-old Notre Dame Cathedral in Paris, an Easter mass marking the crucifixion of Jesus Christ took place on Good Friday.

Although the procession was limited to just seven people because of the country-wide Wuhan coronavirus lockdown in France, the return to the damaged house of worship at the Île de la Cité on the Seine was broadcast nationwide to 67 million viewers.

The True Crown being venerated in the ruins of Notre Dame, on Good Friday, while Ave Maria is sung by a choir wearing PPE. My God. https://t.co/5anHkmuVrJ

Donning hardhats as they proceeded into the Cathedral, the small mass was led by the Archbishop of Paris Michel Aupetit and included scripture read by French actors Philippe Torreton and Judith Chemla as well as music from violinist Renaud Capuçon. The original plan for Holy Week was to mark the survival of the Cathedral and celebrate the resurrection of Jesus Christ as Notre Dame had done for centuries, with large crowds of the faithful. But the onset of COVID-19 in France made those plans impossible.

In the wake of the viral spread across continental Europe, construction on the badly damaged cathedral came to a halt mid-March. The fire, said to be caused by an electrical accident, destroyed the iconic wooden spire and damaged the majority of the interior. Spared by the devastating accident, however, was Notre Dame's most prized relic: a crown of thorns thought to have been worn by Jesus Christ as hung from the cross at Calvary.

Friday's mass centered around the carefully preserved relic, one of just a small number of artifacts to sustain no damage during the fire. Restoration on the damaged Cathedral, which dates back to 1345, is a costly and dangerous process without the threat of disease and economic disaster. Fear of lead contamination was prominent among workers before the construction shut down and more than two tons of melted scaffolding that fell from the roof during the blaze have yet to be removed. Current estimates for the work needed top $1 billion.

Even after a year of meticulous work, the structure is still barely stable enough to enter. The flying buttress is supported by temporary wooden beams and a giant hole still looms above the nave, offering no protection from the weather. Though Easter ceremonies were not possible at the fire-damaged Notre Dame last year, just days after the disaster, Parisian Catholics were able to gather at nearby Saint-Eustache. The global pandemic took away that option this year.

Undeterred by myriad problems facing the celebration of Christ's resurrection, Archbishop Michel Aupetit said earlier in the week that the ceremony would be a symbol for people everywhere affected by the global pandemic.

"This message of hope is especially important in these days where we are particularly affected by the coronavirus, which is sowing anguish, death and paralysis in our country and the world," he said at a press conference.

On a solo trip to the Sacré Coeur basilica at hilltop in Montmartre, the Archbishop blessed "the city of Paris, all of France and the entire world at this time of a global pandemic ... I asked our savior to help those who are aiding others — from health care workers to simple citizens helping their neighbors."