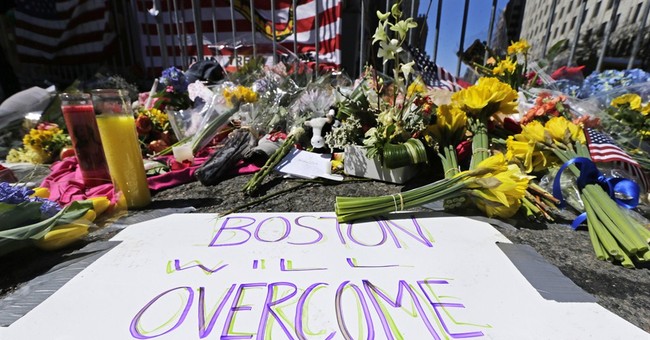 Two years ago today two bombs exploded near the finish line at the annual Boston Marathon. Horrifying photos immediately began circulating in the aftermath of the devastation, an act of terrorism which left three young people dead.* Those of us not present that day wondered how, in both our rage and anguish, such wanton violence could have happened at such a peaceful and family-friendly event.

From the governor of Massachusetts:

Our thoughts and prayers are with the victims and their families, who seek to make sense of that awful day two years ago. #OneBostonDay

Those most affected by the events of 2 years ago have shown us all the way back - with their courage, grace & determination. #OneBostonDay

They honor the past, remember & treasure loved ones lost & injured, & look forward to a better future. We strive for the same. #OneBostonDay

From the mayor of Boston:

We appreciate the strong support for #OneBostonDay - together, we are a stronger City. pic.twitter.com/9hE1lvFrqQ

Please join us in a moment of silence today. pic.twitter.com/pujsnOeDdk

In the face of this horrific terrorist attack, Boston came together to lift each other up & help us heal. #OneBostonDay

Today, we honor the victims & survivors of the Marathon bombing with the 1st annual #OneBostonDay – giving back through acts of service.

*UPDATE: Officer Sean Collier was also shot and killed by the terrorists as they were trying to flee Boston.