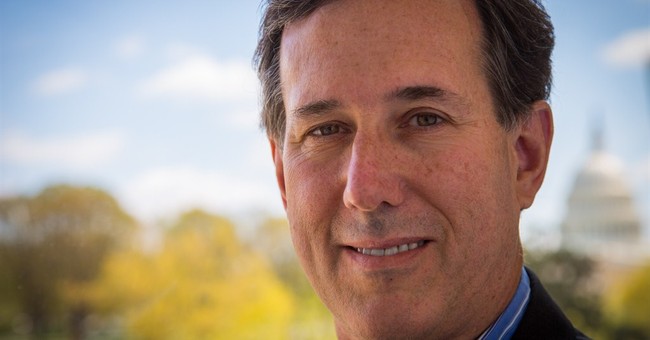 The potential presidential cast of Republican characters in 2016 is rumored to be pretty decent. Now add Rick Santorum to the mix.

Reflecting on how a presidential campaign could be different this time around, Santorum said: “We’re just obviously in a better place right now. Our message will be a lot more focused this time than it was last time.”

Santorum is running again. The question is whether, as the race heads to new terrain, he’ll still be able to keep the pace.

Unlikely in the extreme.

Of course, his supporters would accuse me of perpetuating unfounded conventional wisdom. But it’s exceedingly difficult to see how his credentials stack up against the likes of re-election winning Republican governors from blue states, or current movers-and-shakers in the U.S. Senate. (By the way, Rick Santorum lost his last re-election bid by a landslide).

In fairness, however, Santorum did win nearly a dozen primary contests in 2012, wrote an informative and celebrated new book focusing on blue collar workers in preparation for the inevitable, and has the kind of experience running a national campaign many of his will-be opponents do not. He also has something else:

Whether Santorum can raise the money he needs is another question. Foster Friess, the benefactor who ponied up $2.1 million to a pro-Santorum super PAC in 2012, says he would support him again. The former senator is sounding out other deep-pocketed donors, whom he declined to identify.

Plus, he has an incredible work ethic and a strong rapport with social conservatives. For all these reasons, Santorum fervently believes that his chances of winning the nomination are solid.

But in the end, I suspect most voters are going to go with a candidate who is more charismatic, more relevant, and frankly more electable than he is. They won’t want to return to the failed primary candidates of the last election cycle. Will they?