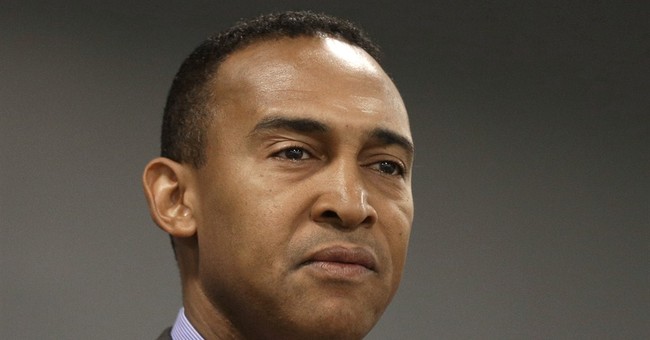 Democrat Patrick Cannon has been the city mayor of Charlotte, NC for about five months or so, and yet he’s already staring down corruption charges. He faces up to $1.5 million in penalties and a 50 year prison sentence if found guilty. Back when he was a city council member in 2010, FBI agents were first tipped off that the longtime public servant was involved in shady and illegal quid pro quo deals for the purposes of self-aggrandizement. The investigation lasted four years; agents finally arrested him today after compiling enough evidence to put him away:

Cannon, a Democrat, was charged with theft and bribery after an FBI sting operation, said Anne Tompkins, U.S. attorney for the Western District of North Carolina. He was released on an undisclosed bond, pending indictment.

Authorities said Cannon took bribes from undercover FBI agents five times – the most recent on Feb. 21 when he took $20,000 in cash in the mayor’s office – and a trip to Las Vegas.

Tompkins said Cannon also accepted from the undercover agents more than $48,000 in cash, airline tickets, a hotel room and use of a luxury apartment in exchange for “the use of his official position,” Tompkins said.

Cannon is the longest-serving elected official in Charlotte, having joined the Charlotte City Council in 1993. He is the region's highest-ranking official to be charged in a corruption case since former N.C. House speaker Jim Black of Matthews was charged. Both are Democrats.

The details of one shady deal are about as sleazy as you might imagine:

At a Jan. 17, 2013 meeting, one FBI agent gave Cannon $12,500 in cash by putting it on a coffee table in front of him. Cannon, according to the affidavit, looked nervously toward a window and covered the money with a folder.

After the agent closed the blinds, Cannon put the money to his ear and fanned the bills.

This incident is equally as shady:

After getting a $12,500 payoff from an agent, Cannon said he was the right man to make sure the nightclub had no problems with the city.

In a conversation with the undercover agent, Cannon later tried characterized his acceptance of the money as a business investment unrelated to his public office, the affidavit says.

In laying out his philosophy of helping, Cannon told the agent that he would have helped him even without the $12,500. “I’m not one of those Chicago- or Detroit-type folk. … That’s not how I flow.”

In an ironic aside during that same meeting, Cannon said that he looked good “in an orange necktie, but not in an orange suit.”

Well, unfortunately for him, he might be forced to wear an orange suit. Obviously, though, he should have thought about that before (allegedly) accepting illegal bribes.