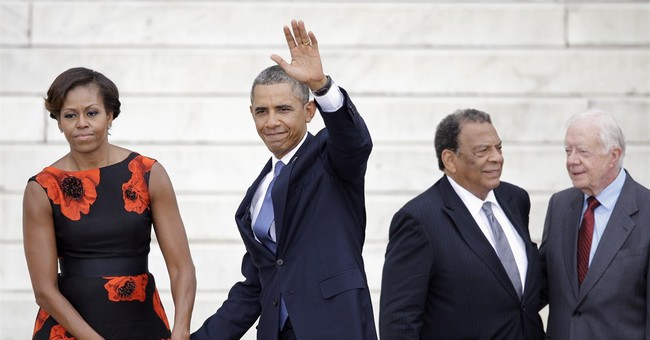 The Hill is keeping track. This is the fifth time he’s “pivoted” to jobs and the economy -- this year:

The White House, for at least the fifth time this year, is seeking to pivot to the economy, this time in a bid to change the subject from the disastrous rollout of ObamaCare.

It’s a common play for the White House, which frequently seeks to refocus attention on its jobs and infrastructure agenda when facing political crises.

The move is so familiar that NBC White House correspondent Chuck Todd has dubbed it the “déjà pivot.”

The Hill counted at least five times the White House has sought to pivot to the economy this year by reviewing news accounts.

Republicans, citing their own statistics, argue that President Obama has circled back to the economy at least 14 times since 2011.

It doesn’t matter how many times he’s “circled back” to talking about an issue voters care deeply about. The point is he only seems to do so when he’s in political trouble; in this case, over mounting and horrific stories about Americans losing their health insurance, and the federal government failing to fix Healthcare.gov before the self-imposed deadline on Saturday. Even Democratic strategists are conceding that switching the topic of discussion from health care to the economy is, well, smart:

“They should be talking about areas where voters are most deeply concerned, and if you’re going to have a big fight, should it be over the implementation of healthcare reform or one on the economy? One is clearly advantageous to us,” he said.

In fairness, the president can’t focus all his attention on Obamacare, despite all the problems. The economy can and should be a top priority. But when you “pivot” to jobs 14 times in two years, according to Republicans, it’s hard to take the administration too seriously on this issue. At a certain point, Americans will see through the charade. They’ll begin asking themselves the following question: is the president more concerned about getting the economy booming again, or diverting attention from his signature health care law -- or other political crises? I have no doubt the president wants to see the economy improve. But it’s nevertheless strange he only seems to want to talk about it when things aren’t going his way. Or, perhaps, it isn't that strange at all.