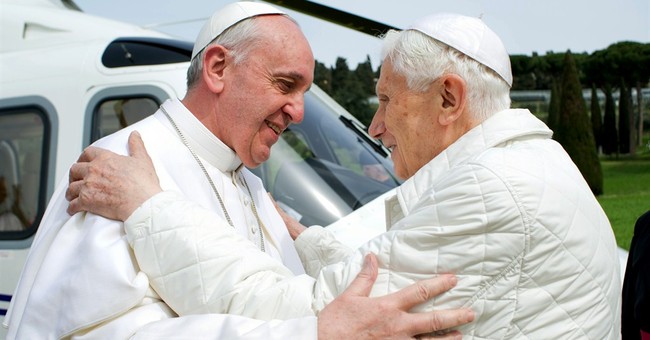 On April 27, 2014, two former Bishops of Rome -- John XXIII and John Paul II -- will be canonized, i.e., formally recognized as saints in the Catholic Church. And by the way, the announcement date is not insignificant either: the two world leaders will be honored on Divine Mercy Sunday, a day of special significance especially for Blessed John Paul II:

Pope Francis said Monday he would canonize two of his most influential predecessors, John Paul II and John XXIII, on the same day next spring, a highly unusual move that was taken as a gesture designed to promote unity within the Roman Catholic Church.

The two popes, who have disparate followings among reformers and conservatives within the church, will be declared saints on April 27, Francis said during a meeting with cardinals at the Vatican. Each achieved considerable international stature: John Paul II for encouraging the fall of communism in his native Poland and across Eastern Europe, and John XXIII for assembling the liberalizing Second Vatican Council, which ran from 1962 to 1965.

“To celebrate them together is a sign of appreciation of the holiness of two popes who paid witness to our time,” the Vatican spokesman, the Rev. Federico Lombardi, said during a news conference on Monday.

The pope announced in July that he would canonize the two men but did not set a date, and there were initial indications that he would act this year. Father Lombardi said April 27, the first Sunday after Easter, would be “a good date for pilgrims who might already be in Rome.”

As is customary, candidates for sainthood generally must have performed two miracles. But, in order to expedite the canonization process, Pope Francis waved the second miracle requirement for John XXIII:

Candidates for sainthood usually have two miracles attributed to them. But Francis approved the canonization of John XXIII with only one — the curing of an ailing woman — which Father Lombardi said in July was a result of eagerness to honor “the great pope of the Second Vatican Council.”

On Monday, he said the canonization should be seen “in the context of the 50th anniversary of the Second Vatican Council, and the universally heartfelt fame that surrounds John XXIII.” He said that while John was the council’s initiator, John Paul was “its great implementer.”

He added that Francis described John Paul II as a “great visionary, the new St. Paul,” during an impromptu news conference on the papal plane returning from World Youth Day in Brazil in July.

A Vatican committee credited John Paul II with interceding to cure a French nun, Marie Simon-Pierre Normand, of Parkinson’s, the disease he died from in 2005.

His second designated miracle was the healing of a woman who prayed to him on the day of his beatification.

Interestingly, it’s not impossible that His Holiness, Pope Emeritus Benedict XVI, will attend the ceremony, temporary leaving his cloister to participate in the celebration:

“There is no reason — either doctrinal or institutional — that he couldn’t participate in the public ceremony,” Father Lombardi said, responding to news reports from Poland that the retired pope would be present.

Hopefully Pope Benedict is well enough to attend. After all, this will be a holy and historic day in the life of the Catholic Church -- a world event that will likely draw millions of people from across the globe to bear witness. And yet whatever the reason for the joint canonization day (there is some speculation that it might have something to do with politics, of all things) this much is clear: Divine Mercy Sunday next year will be a day of unity and thanksgiving for the Catholic Church. And all those who can’t attend in person should do their best to attend in spirit.

That's what I'll be doing.