Hagel: Our Military is “Ready” to Intervene in Syria 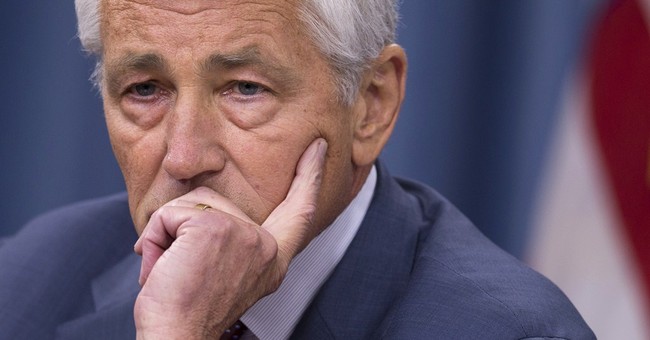 Katie reported earlier today that U.S. airstrikes against Syria seem imminent. However, the idea of a full scale military intervention into the war-torn country should give the president and members of Congress serious pause. Why? Because Americans are leery of plunging into another unwinnable conflict -- and hardly predisposed to sending more U.S. troops into harm’s way. Nonetheless, according to Secretary of Defense Chuck Hagel, the U.S. military is prepared for anything.

Defense Secretary Chuck Hagel on Tuesday said the U.S. military is “ready to go” if the decision is made to act in Syria.

Hagel said the defense department is “ready to carry out” any option President Barack Obama decides to take in responding to Syria, “in coordination with out international partners.”

The BBC’s Jon Sopel asked Hagel what the possible military actions could be, saying “presumably they range from, I don’t know, a Tomahawk cruise missile strike to anything to troops on the ground and an invasion in the style of Iraq in 2003.”

“You should be the minister of defense. You’ve just laid out a different range of options. Suffice to say, the options are there,” Hagel told the BBC in an interview during a trip to Brunei. “The United States Department of Defense is ready to carry out those options. If that would occur, that would occur also in coordination with our international partners.”

Hagel said Obama asked to be given “all options for all contingencies” and that “we have done that.”

Obviously Hagel isn’t pushing for military intervention here. Rather, he’s merely informing the public that the military option is available -- and that he’s “ready” to carry it out if and when he’s given the order.

On Monday, Mr. Kerry finally made a statement about the horrifying chemical weapons used against Syrians that killed at least 300, likely more. “The indiscriminate slaughter of civilians, the killing of women and children and innocent bystanders, by chemical weapons is a moral obscenity.”

That is the strongest language the diplomat’s speechwriters could come up with to describe this horror?

Here are some terms that Mr. Kerry could have used to better describe the situation in Syria: Crime against humanity, mass murder or killing with weapons of mass destruction.

Indeed. She also points out that the president’s much-publicized “red line” warning in Syria has already been crossed…twice. This, if anything, makes Washington look irresolute and weak-kneed, no? Over to you, Rich Lowry:

When Assad prepared to use chemical weapons last year, President Obama warned of a fearsome “red line,” with no intention of following up on it. When Assad called his bluff, the president announced that he would provide small arms to the rebels in retaliation, but he hasn’t actually done it yet. Is it any wonder that Bashar Assad would, like Vladimir Putin, think he had taken the measure of the man? Last week, Assad killed hundreds in another chemical-weapons attack.

The sharply worded warning ignored by everyone has become the Obama administration’s characteristic rhetorical trope. Its warning to the military junta in Egypt not to crack down on the Muslim Brotherhood was taken with all the seriousness of its admonitions to Assad to step aside. The Obama administration has responded to the resulting crackdown by suspending some aid to Egypt in secret, at the same time that the Saudis — one of our closest allies — say it doesn’t matter what we do because they will replace whatever aid we cut.

Not surprisingly, when President Obama fails to back up stern, "red line" warnings with meaningful action hostile powers will inevitably fail to take him seriously. This is to be expected, right? Question is: What will he do now?