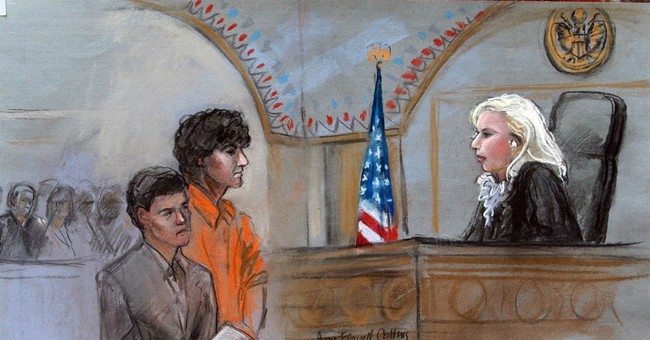 The evidence is overwhelming that Dzhokhar Tsarnaev participated in a terrorist plot that killed three innocent people (including an eight-year-old boy) and injured 264 others at the Boston Marathon last April. But we are a nation of laws, of course, and the “suspected” terrorist is getting his day in court (via USA Today):

Appearing disheveled and fidgety, Dzhokhar Tsarnaev turned repeatedly to gaze into the crowd that packed a federal courtroom Wednesday to see him plead not guilty to 30 counts charging that he bombed the Boston Marathon.

Watching him were 30 victims of that April bombing and their families, and some people who said they were there to show support for the 19-year-old Russian.

Public defender Judy Clarke tried to enter a single "not guilty" plea on Tsarnaev's behalf and have it apply to all counts in the indictment, but Judge Marianne Bowler said Tsarnaev would speak for himself and all the charges against him would be read aloud.

Flanked by his two attorneys, Tsarnaev said only two words — "not guilty" — and repeated them seven times as prosecutors read the charges. Each of the 30 counts could bring a life-in-prison sentence. Seventeen could make him eligible for the death penalty if the government decides to seek capital punishment.

He was literally caught on camera at the scene of the crime carrying a black backpack (presumably) filled with explosives. He later evaded authorities after his brother was killed for hours after a late-night shootout with police, leading to a full scale manhunt that left the city on lock-down. And yet, according to one police officer inside the courtroom, it’s appallingly clear that the man suspected of engaging in terrorism and killing innocents is seemingly unaffected by the grisly charges brought against him:

Lacey Buckley, an at-home mother from Washington state, said she had traveled across the country to be present at the arraignment. She manages the "Justice for Tamerlan, Rest in Peace" page on Facebook and was wearing a "Free The Lion — July 10" T-shirt with Dzhokhar Tsarnaev's picture on it.

"So far, I haven't seen the evidence" that he's guilty, Buckley said. "Why is he charged? Just because a couple of guys had backpacks" near the marathon finish line where two bombs went off?

Mary Churbuck, a Muslim from Freetown, Mass., said she won't believe Tsarnaev is guilty even if a jury convicts him.

"He's not going to get a fair trial," Churbuck said. "This city has already convicted him."

MIT Police Chief John DiFava, who was also in the courtroom, told the Associated Press that Tsarnaev looked "smug."

If Tsarnaev is in fact guilty, there’s no doubt in my mind that he’s “proud” of what he did. He escaped capture for days. He terrorized an entire city. He waged jihad. And he killed innocent Americans. I’m not going to jump to conclusions, of course. But I do hope the trial is fair and justice is served quickly -- allowing those affected, and their families, a chance to put these horrifying events behind them.