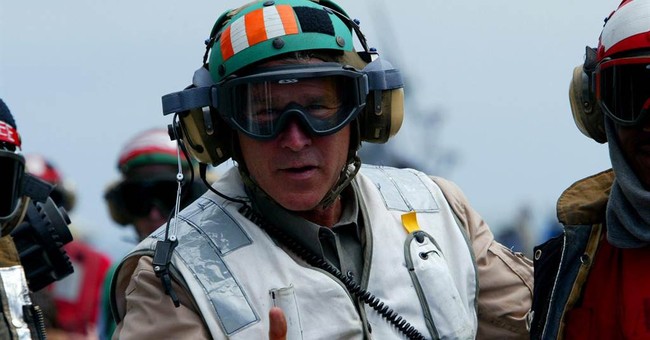 For the first time in eight years, former President George W. Bush’s favorability ratings are no longer underwater, according to a recent Gallup study:

Julian Zelizer, a professor of history at Princeton University, explained why his numbers are slowly rising in a CNN op-ed last Thursday:

The most obvious reason is that the passions for presidents -- both good and bad -- tend to go down after they leave office. Americans turn their attention to the new boss and to new issues, and the focus of their sentiment shifts elsewhere. This is particularly true in our heated political times when voters become so polarized on their feelings about a leader -- feelings that can become most intense as we approach the elections.

Another factor has to do with what the successor does in office.

Much of the controversy that surrounded Bush had to do with his national security policies. The war in Iraq caused a huge controversy with many Americans feeling the president had gone into an unnecessary war based on false evidence. By the second term, many Americans were also upset with some of the tactics the administration had used to pursue terrorists, such as interrogation.

But President Barack Obama, who campaigned as a critic of these policies, ended up leaving many of the programs in place and actually becoming more aggressive on certain fronts, such as the use of drone strikes. Obama has given these controversial policies a certain bipartisan imprimatur that has dulled the anger that existed toward Bush.

Zelizer also notes that Bush’s decision to stay out of the spotlight is contributing to his public rehabilitation. Nonetheless, he explains, one shouldn’t dwell on these numbers for too long: positive approval ratings are by no means permanent -- and can shift in an instant if “polls are tallied at a moment when a president resonates with the politics of the moment.” Meanwhile, archival records oftentimes change the way posterity views presidential administrations. In fact, he says, this is precisely why we remember Dwight Eisenhower and Ronald Reagan in more favorable terms. Perhaps, then, when Bush’s archival records do become fully available to the general public, future generations will be less inclined to judge him as harshly as some Americans do today. That’s what the president himself is hoping for, I suspect, although whether or not that actually happens remains to be seen.