Trump Team: 'You Can't Incite What Was Already Going to Happen' 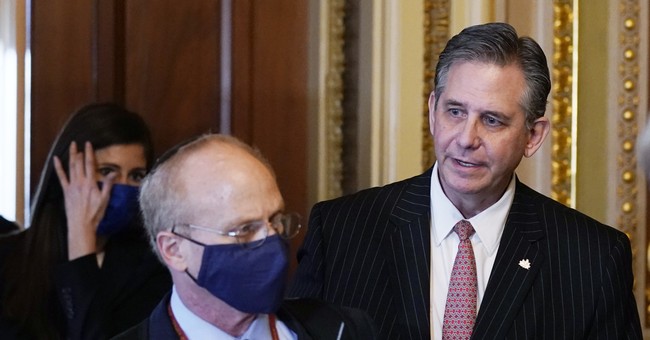 Former President Trump's legal team got off to a better start on Friday after their off track performance earlier this week, presenting more focused arguments as to why they believe Trump did not incite the deadly January 6 riots. For starters, Philadelphia lawyer Michael van der Veen made the case that Trump's use of the word "fight" was not to be taken literally.

"No thinking person could seriously believe that the president's January 6th speech on the Ellipse was in any way incitement to violence or insurrection," he said. "The suggestion is patently absurd on its face."

As he explained, phrases like "fight like hell" and "battle" are popular among politicians, even President Biden. It is, Van der Veen said, "ordinary political rhetoric."

Defense attorney Michael van der Veen defends Trump telling the January 6 rally crowd to "fight like hell" by pointing out that one of Joe Biden's campaign slogans was "Battle for the Soul of America" https://t.co/YUg7sgxuDX pic.twitter.com/Yly95siiuK

Lawyer David Schoen emphasized that Trump often referred to himself as the "law and order" president and had no patience for violence.

"President Trump did not incite the horrific terrible riots of Jan 6," Schoen said. "We'll demonstrate to the contrary the violence and looting goes against the law and order message he conveyed to every citizen of US throughout his presidency including on Jan. 6."

Michael van der Veen, one of the lawyers defending Trump: "Under the standards of the House impeachment article, each of these individuals should be retroactively censured, expelled, punished or impeached for inciting violence by their supporters." pic.twitter.com/UeEpjraAzX

Van der Veen also argued that there is evidence the attack on the Capitol was planned long before President Trump's January 6 speech.

“According to publicly available reporting it is apparent that extremists of various different stripes and political persuasions preplanned and premeditated an attack on the Capitol,” Van der Veen said.

Critics countered on Twitter that the mob was by and large made up of Trump supporters. But the defense team insisted the riot was going to happen no matter what the president said that day in the nation's capital.

"The fact that the attacks were apparently premeditated, as alleged by the House managers, demonstrates the ludicrousness of the incitement allegation against the president," he explained. "You can't incite what was already going to happen."

The prosecution argued the opposite. Even if some rioters had pre-planned their attack, it doesn't exonerate the president, whose rhetoric could still have prompted some rioters, the Democrats argue.

“Everything is due to his actions,” argued lead impeachment manager Jamie Raskin on CNN.