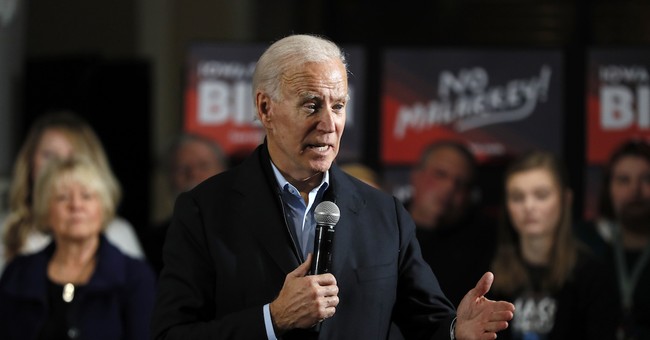 Former vice president and presidential candidate Joe Biden told a crowd in Peterborough, New Hampshire over the weekend that if fossil fuel executives don't take accountability for helping to doom the environment, we should throw them in jail. See below.

.@JoeBiden on fossil fuel execs: “We should put them in jail” for pollution pic.twitter.com/OLqZMwi4E5

In order to curb the rate of pollution, Biden explained, we need to hold fossil fuel executives "liable for what they have done, particularly in those cases where there are underserved neighborhoods."

When they don't deliver, Biden offered, "put them in jail."

Some spectators noted his obliviousness. Surely he didn't forget that his son Hunter was on the board of Burisma Holdings, a Ukrainian gas company that was being investigated for corruption? I mean, it has been in the news lately.

"Does that include Hunter?" more than one social media user asked the former VP after his little speech.

Hunter's work on Burisma reportedly prompted President Trump to ask Ukrainian President Zelenskyy to "look into" the Bidens' relationship to Ukraine and to help root out corruption. A whistleblower, however, charged that Trump was acting on behalf of his own personal, political interests, because the investigation could adversely affect the campaign of one of his fiercest 2020 rivals. The whistleblower complaint prompted the Democrats' impeachment inquiry against Trump, and a few tense hearings and partisan votes later the House voted to impeach him on abuse of power and obstruction of Congress. House Speaker Nancy Pelosi is currently withholding those articles from the Senate.

Biden also borrowed a line from Rep. Alexandria Ocasio-Cortez (D-NY) to declare that if we don't stop using fossil fuels for energy, "we're all dead."