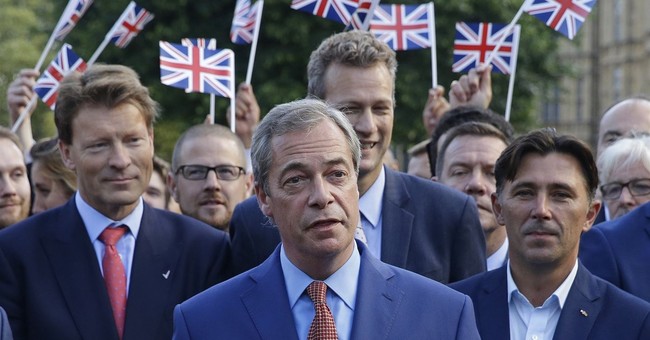 Nigel Farage led the campaign to leave the European Union in 2016 and, shockingly, succeeded. Yet, a few days after the victory, the Ukip leader announced he was resigning, having achieved his political ambitions.

He apparently didn't leave Brexit in good hands. Prime Minister Theresa May returned from European Union negotiations with a deal that has now been rejected by Parliament three times. She tried to explain where the stalled process stood in a recent video posted to her Twitter page.

“We absolutely must leave the European Union,” May insists. "We must deliver Brexit. That means we need to get a deal over the line.”

That means “cross-party talks" and compromise with the Labour Party, she admitted. But delivering Brexit is "the most important thing for us."

Farage watched the prime minister's video and felt compelled to tell his followers that she left out some key details.

Yesterday @Theresa_May had a chat with you on her sofa.

She was lying again. Here is what the PM didn't tell you... pic.twitter.com/jI4IzgdBcs

"Her deal," Farage said by way of clarification, "is actually a new European Union treaty, binding in international law and which we can’t leave ever, unless the European Union say so. She’s given you a false choice."

A treaty with amendments from the Labour Party is unacceptable, Farage said. Instead, he suggested, they need to extend the date of Brexit.

“Not only is this the most incompetent and worst prime minister that I’ve seen in my lifetime, but she’s also the most duplicitous and the most dishonest as well.”

He followed that up with an announcement he is leading the brand new Brexit Party, which has been officially registered with the Electoral Commission.

Others have joined him. Michael Brown, who served as a Conservative MP for 18 years, was convinced to leave the Tories because "the Prime Minister has decided to betray Brexit by asking Jeremy Corbyn to help her cancel Brexit."

"Saturday Night Live" finally spoofed Theresa May's Brexit debacle this weekend. In the skit, May appears to be the most despised person in England. She gets dodged glances, a thumbs down from a toddler, and the middle finger from British guards, all while Sara Bareilles sings a somber ballad on the piano.