Have You Seen This Now Iconic G-7 Photo? 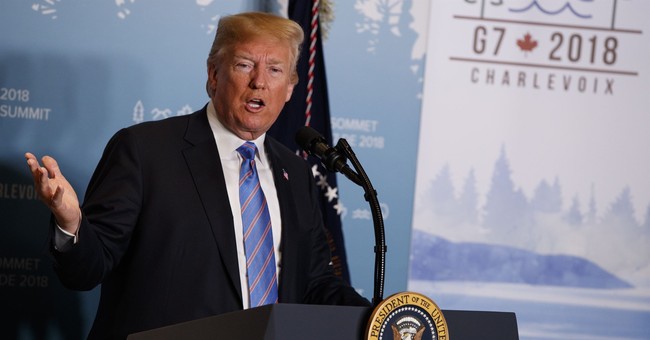 President Trump has refused to budge on his tariffs against Canada and European countries. Canadian Prime Minister Justin Trudeau and French President Emmanuel Macron entered into a war of words with him about the punitive trade measures, but Trump was unmoved, insisting that the two of them, although allies, had been taking advantage of the trade process for far too long.

That's the tantalizing context for this now iconic photo at this past weekend's G-7 summit in Canada, shared by several people in the room, including National Security Advisor John Bolton.

Just another #G7 where other countries expect America will always be their bank. The President made it clear today. No more. (photo by @RegSprecher) pic.twitter.com/emAVNqRqhc

Bolton's caption suggests the leaders were discussing tariffs. German Chancellor Angela Merkel is in a stare down with Trump, while Macron is clasping the table, exasperated. With arms crossed, eyes squared, Trump certainly seemed irresolute about the trade measures.

Like Bolton, Trump's son Donald Trump, Jr. was proud of his dad for standing his ground, unlike his predecessor.

John Bolton: “Just another #G7 where other countries expect America will always be their bank. The President made it clear today. No more.” Very well said #AmericaFirst #maga

Some media, though, interpreted the photo as another embarrassing moment for the U.S. Esquire sighed that the photo proved how Trump was still alienating our allies. The photo, the editors wrote, was the only glimpse we got of the U.S.'s "disastrous showing" at the summit. Celebrities like George Takei even said on Twitter that the photo proved Trump was an "international disgrace."

Other angles of the scene, however, told different stories.

Guess which of these two photos (taken moments apart) all major media outlets chose to run with? #G7 pic.twitter.com/LxFz3eKfsk

The one on the left, not as widely shared, clearly shows softer facial expressions from the other world leaders.

Then we have these four angles.

Of course, the photo also got the entertaining meme treatment.

Trump's tweets after the summit give credence to the first photo. He notified the other six nations he would not be supporting the joint agreement at the summit's conclusion. Merkel said the news was "depressing." Trudeau plans to hit the U.S. with retaliatory sanctions starting in July and Merkel said the EU will follow suit.