Cuomo's Republican Challenger Demands He Apologize for 'Mocking' the Disabled 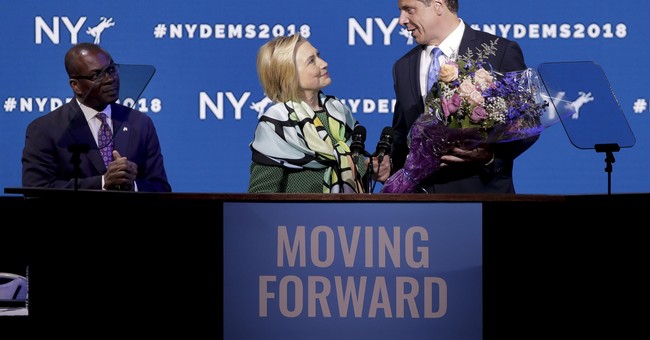 This week at the New York state Democratic convention, Gov. Andrew Cuomo teased his brother Chris for having been adopted, suggesting he has "developmental issues."

“This morning I did CNN. I have a brother. He’s not a natural brother, he’s adopted. But we treat him like he’s a natural brother,” the governor said in what was intended as good-natured ribbing during his address at Hofstra University.

“It’s actually a funny story. He was found at our front door in a basket and he was 16 years old. So he has certain development issues.” (New York Post)

Cuomo said it as a joke, but newly minted Republican gubernatorial nominee Marc Molinaro, the Dutchess County executive, did not find it funny.

"Gov. Cuomo should stick with being angry and misleading because his joke mocking the issue of individuals with developmental disabilities is shameful,” Molinaro said. “We need elected leaders who are willing to think differently instead of speaking ignorantly. If Gov. Cuomo has any decency he will apologize.”

Meanwhile, the Democratic National Committee has made what appears to be a 180-degree turn on their gubernatorial endorsement. The committee said they had no interest in getting involved in state primaries. If they were going to get involved, they hinted toward supporting Cuomo's liberal challenger, former "Sex and the City" star Cynthia Nixon. DNC Vice Chair Rep. Keith Ellison (D-MN), for instance, praised Nixon last month for taking on the issues. But on Thursday the committee endorsed the incumbent.

"The party elites are out of touch with where the base of the party is at," said Jonathan Westin of the progressive activist group New York Communities for Change.