Republicans Return to the Baseball Field 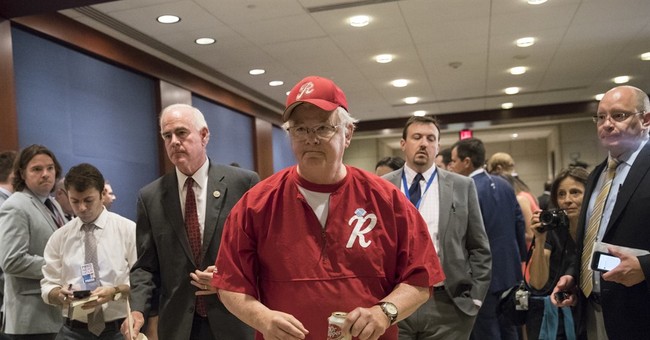 "It was important to come out here and show the world that we're not going to be deterred," Rep. Barry Loudermilk (R-GA) said Wednesday at Simpson Field.

Republican lawmakers returned to their practice location in Alexandria, VA Wednesday for the first time since the June 2017 shooting, some wearing the same jerseys. On the morning of June 14, 66-year-old James Hodgkinson fired 70 rounds of gunfire on the Republicans while they were practicing for the next day's ball game against the Democrats. Five people were wounded. Rep. Steve Scalise (R-LA), who was on second base, was by far the most badly injured. Shot in the hip, Scalise underwent several surgeries, including one as late as this weekend. When he was well enough to return to Capitol Hill in September, he received a standing ovation.

Understandably, there was an increased police presence on the field Wednesday. Some lawmakers wore Capitol Hill police hats in honor of the heroism the officers displayed the day of the shooting.

Scalise was able to show his gratitude to his security officers Crystal Griner and David Bailey by awarding them the John J. Duffy Memorial Achievement Award in March. The heroes were also given Medals of Honor.

Scalise was not able to join his teammates on their first practice back Wednesday, but he shared the following upbeat statement, read by the team's manager, Rep. Joe Barton (R-TX).

"It is so important that we continue to maintain the same tradition," Scalise said in a statement read by Barton. "Most years we compete for starting positions and rekindle old relationships. This year's different: the whole country is watching with pride as we come together and prove that one act of madness will not tear the spirit of camaraderie and philanthropy that has made this such a strong institution of Congress."