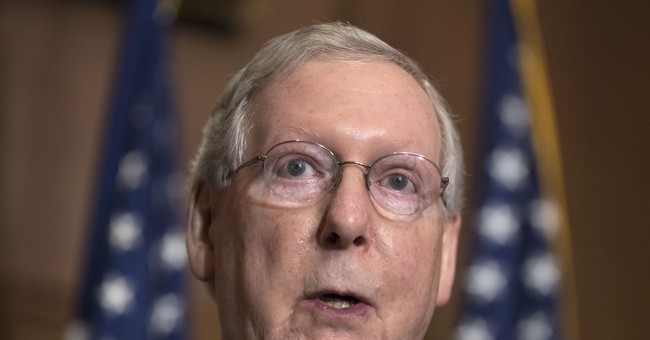 In a press conference following their meeting with President Trump, GOP senators said they wished their Democratic colleagues would stop with the partisan politics. Senate Majority Leader Mitch McConnell was especially frustrated by his counterpart Chuck Schumer and House Minority Leader Nancy Pelosi for skipping out on a meeting with the president over a tweet.

Early Tuesday morning, Trump tweeted his doubts that any progress would be made on the spending bill in talks with the Democrats.

Well, Schumer and Pelosi took that as a rescinded invitation. In a joint statement, the Democrats said they'd rather not attend a "show meeting" with the president. Instead, they invited McConnell and House Speaker Paul Ryan to meet with them on their own in the afternoon.

McConnell, judging by his remarks Tuesday to the press, was not interested. He skewered the Democrats for shirking an opportunity to enact real tax reform.

The majority leader noted that he "never refused" to have a meeting with President Obama and accused Schumer and Pelosi of having a "lack of seriousness."

Schumer pushed back in his own press conference, noting that Trump's tweet this morning proved that their discussions were going to be nothing but a "photo op." He again urged McConnell and Ryan to sit down with them. If the president reverses course, Schumer said they are "happy" to meet with him.

The Senate is trying to pass a spending bill before Dec. 8, at which point the government may need to shut down.