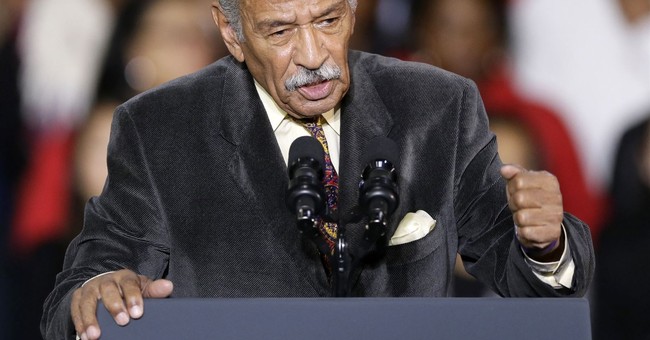 Melanie Sloan worked as John Conyers's (D-MI) lawyer in the 1990s. She has now joined the growing list of women accusing the representative of misconduct.

While she says she was not sexually harassed, she describes to the Detroit Free Press being verbally harassed and made uncomfortable on a number of occasions. She detailed Conyers bizarre behavior at one meeting in particular.

But she said that on one occasion, she was called to Conyers’ office in the Rayburn House Office building for a meeting and, when she got there, he was in his underwear.

“He was just walking around in his office, not dressed,” she said. “He wasn’t doing it to hit on me. It was more like he could do what he wanted. I was quite shocked by it and left quickly.”

Other alleged victims have described how Conyers made unwanted sexual advances toward them. Documents obtained by BuzzFeed News revealed how he paid out thousands of dollars in settlements to his first accuser.

Conyers was elected in 1964, making him the longest serving member of Congress.

Although Sloan recalls being "increasingly anxious and depressed" about going to work, like many victims of sexual assault on Capitol Hill, she was reluctant to report cases of sexual harassment for fear of being alienated (Sloan says she was once told she was "mentally unstable" for making such allegations against Conyers), or because the process of reporting to the Office of Compliance was too cumbersome.

Rep. Jackie Speier (D-CA) and Sen. Kirsten Gillibrand (D-NY) have introduced legislation in an effort to streamline the process, making it easier for victims to come forward. Rep. Barbara Comstock (R-VA) made it a bipartisan effort when she joined Speier at a hearing last week to share what she knew about harassment on the hill. In the hearing, Speier claimed that she knew of at least two members of Congress currently serving who have been accused of sexual harassment. Conyers was not one of them, she said.

House Speaker Paul Ryan is taking the female lawmakers' requests seriously it seems, mandating earlier this month that members of Congress now have to participate in anti-harassment training.