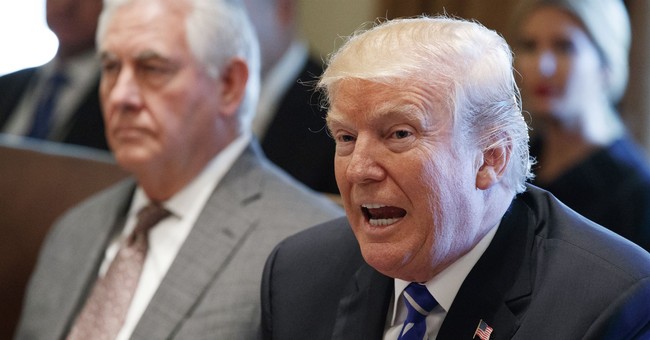 In a cabinet meeting Monday, President Trump announced that the U.S. is placing North Korea back on the list of state sponsors of terrorism.

.@POTUS: "Today the United States is designating North Korea as a state sponsor of terrorists." pic.twitter.com/nDZIijQVvM

The designation will place "further sanctions and penalties" on the Kim Jong-un regime.

With his announcement, Trump reverses a 2008 decision by President George W. Bush to remove North Korea from the list.

Under Kim Jong-un, North Korea has been more aggressive in its ballistic missile testing, despite repeated threats from the U.S. At the United Nations General Assembly in September, President Trump referred to the North Korean dictator as "rocket man" and warned him that if the U.S. is forced to defend itself or its allies, they will have no choice but to "totally destroy North Korea."

"Rocket man is on a suicide mission for himself and for his regime," Trump said. "The United States is ready, willing and able, but hopefully this will not be necessary."

Following his 12-day trip through Asia earlier this month, the president declared that one of his goals was to unite the world against the North Korean threat, which he said required "urgent action."

“I applaud the administration for relisting North Korea as a state sponsor of terrorism," Royce said. "Over the past year alone, Kim Jong-un and his regime brazenly assassinated his brother with a chemical weapon and brutally tortured Otto Warmbier, leading directly to his tragic death. These aren’t isolated incidents, but are examples of a consistent pattern of terror. The regime also continues its push to develop nuclear weapons and intercontinental ballistic missiles, threatening global security. This designation – endorsed by a high-ranking North Korean defector who recently testified before the committee – rightly exposes the Kim regime’s utter disregard for human life and is an important step in our efforts to apply maximum diplomatic and financial pressure on Kim Jong-un.”