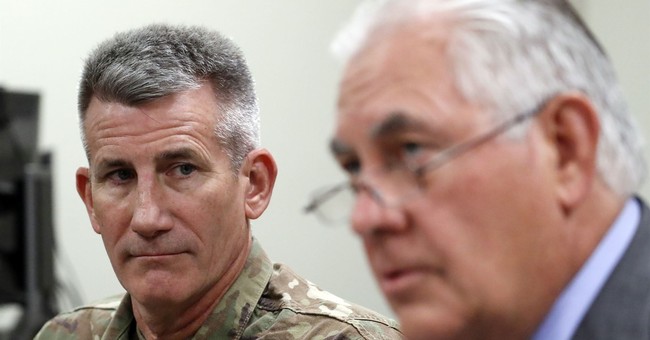 Secretary of State Rex Tillerson made a surprise visit to Afghanistan Monday, where he tried to convince the Taliban there is no hope for them on the battlefield and to talk negotiations.

Tillerson, who is on a weeklong trip through the Middle East, India and Switzerland, met with Afghan President Ashraf Ghani at Bagram Air Base near Kabul Monday before making the following statement.

“There are we believe moderate voices among the Taliban, voices that do not want to continue to fight forever. They don’t want their children to fight forever,” Mr. Tillerson said. “So we are looking to engage with those voices and have them engage in a reconciliation process leading to a peace process and their full involvement and participation in the government.”

The Trump administration, Tillerson insisted, is dedicated to peace talks in the region. Yet, that doesn't mean the U.S. has an "unlimited” or “blank check” commitment.

Sec. Tillerson on #Afghanistan: @POTUS has made it clear that we’re here to stay until we can secure a process of reconciliation and peace. pic.twitter.com/H3ZH66i7gA

As the Wall Street Journal notes, Tillerson's visit comes in the context of heightened violence in Afghanistan.

Mr. Tillerson’s unannounced visit to Afghanistan came following a week of escalating violence in which more than 200 people were killed in a series of suicide attacks across the country that targeted soldiers and police, and members of the minority Shiite community.

During his unannounced visit, the secretary of state noted that Pakistan's cooperation was crucial to stamping out the Taliban's extremism.

“Pakistan needs to I think take a clear-eyed view of the situation that they are confronted with in terms of the number of terrorist organizations that find safe haven inside of Pakistan," Tillerson said.

In August, President Trump announced that the U.S. will be increasing its military presence in the 16-year war in Afghanistan. Military officials explained that would amount to a maximum of 4,000 new troops. The president made the decision after speaking with his military advisors and despite initially wanting to pull out of Afghanistan.

Following his trip to Afghanistan, Tillerson made another unexpected visit to Baghdad Monday.