Heitkamp Defends Her Vote for Gorsuch 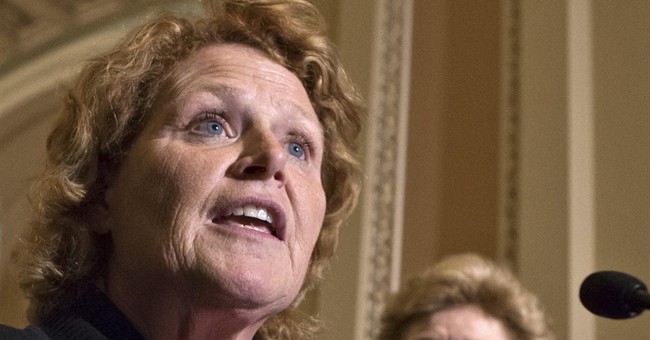 Sen. Heidi Heitkamp (D-ND) was one of just three Democrats to vote for President Trump's Supreme Court nominee Neil Gorsuch last week. Her decision was especially bold, considering the majority of her colleagues engaged in a partisan filibuster of the nominee. Heitkamp reflected on her vote in an interview on CNBC's "Squawk Box." She noted that while she was appalled at the GOP's blocking President Obama's pick Merrick Garland and Gorsuch would "never" have been her first choice, he nevertheless deserved a fair confirmation process.

She has no regrets.

"Elections have consequences," she said. "This was someone who was qualified. You may not agree with all of his decisions."

Justice Ruth Bader Ginsburg would agree. At an Allegheny College event Monday, in which she and the late Antonin Scalia were awarded a civility prize for placing friendship over ideology, she expressed her dismay over how partisan the Senate has become. When she and Scalia were confirmed, she recalled, both votes were nearly unanimous.

The other two Democrats to break ranks and vote for Gorsuch were Sens. Joe Manchin (WV) and Joe Donnelly (IN). All three are up for re-election next year in states which Trump won handily in the 2016 presidential contest.