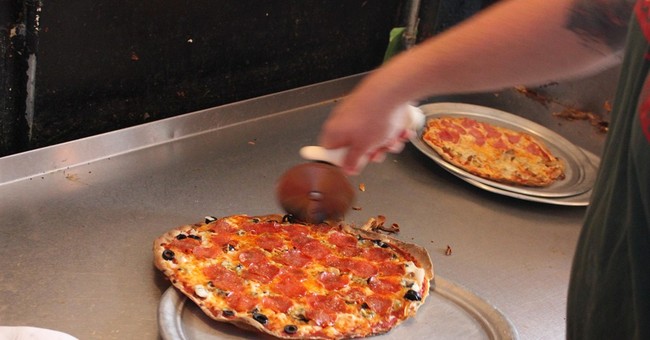 The American Pizza Community held a meeting in the nation’s capital on Wednesday to sound the alarm over the Food and Drug Administration’s business-killing menu-labeling standards. Come May, if the Obamacare regulation goes into effect, chain restaurants will need to include calories on all their materials. It is a “one-size-fits-all approach that would significantly impact small business franchisees and their ability to grow and creates jobs,” the APC warns.

The APC went into detail about several burdens the regulation places on food establishments in a briefing document which was handed out at the event. Because of the broad definition of “menu,” restaurants will be forced to provide nutritional information on all their advertising, they explain.

Definition of menu – FDA’s guidance document confirmed one of the most egregious elements of the final rule: the definition of most advertising and marketing materials as menus requiring calorie labels. FDA created a set of factors to determine whether or not it considers something to be a menu. FDA defines a menu as any material that lists, or has an image of, at least one standard menu item, includes the price of the item, and can be used by a customer to make an order (e.g., by including a phone number or web address). This broad interpretation means that a majority of print advertising, including door hangers, fliers, direct mail, and circulars, will have to be calorie-labeled. FDA insisted that this was not its intention and that it would clarify its position in a guidance document: in the guidance documents, FDA explained, “advertising or marketing material (including coupons) generally would not be considered menus or menu boards.” However, “in the example of a pizza coupon that includes a phone number or web address where the customer can place and that states ‘1 large pepperoni and sausage pizza $9.99,’” the coupon can be used to place and order, and therefore requires calorie labeling. Given the industry’s focus on remote ordering, many promotional materials include phone numbers of local pizza stores, and as a result, will now be considered menus that must be labeled. It is important to note that calories must be typed in a size “that is no smaller than that used for the name or price” of the item (whichever is smaller). This requirement risks creating serious confusion for impacted businesses and consumers.

The organization noted that Congress has tried to address the issue, introducing legislation like the Consolidated Appropriations Act to mandate that the FDA delay the regulation until more guidance was provided and the Common Sense Nutrition Disclosure Act (CSNDA) to address more challenges. Unfortunately, Congress adjourned before the Senate could consider the bills.

Moreover, even if Obamacare is repealed, public policy would revert to the regulations passed by states and localities that initially contributed to the federal statute.

The APC is urging the Trump administration to focus on a three-point plan to fix the FDA regulation: Delay the rule for at least 120 days, withdraw it and rewrite it.