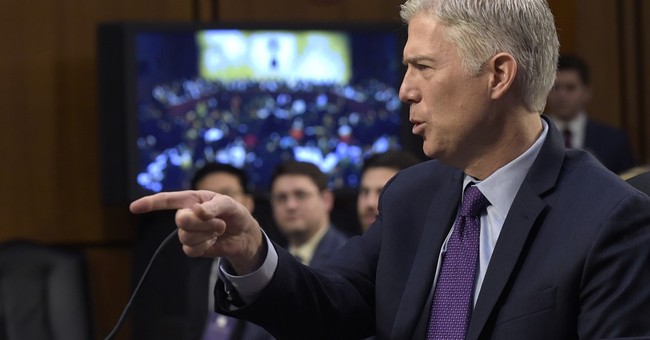 The senator interpreted the executive order as a religious test and he asked Gorsuch pointedly if he believes an immigrant wanting to enter the country should be subject to a religious examination. The nominee said that would be inappropriate, not to mention against the law.

Leahy stayed on the topic, however, to note that a Republican congressman, whom he did not mention by name, reportedly said that he wants Gorsuch confirmed because he would uphold the president's "Muslim ban." The implication visibly frustrated the judge, who holds himself to a high standard when it comes to judicial independence.

“Senator, he has no idea how I’d rule in that case and, senator, I’m not going to say anything here that’s going to give anybody any idea how I’d rule in any case like that that could come before the Supreme Court or my court on the 10th Circuit,” Gorsuch said, tapping a pointed finger on his desk to emphasize his words. “It would be grossly improper of a judge to do that. It would be a violation of the separation of powers and judicial independence if someone sitting at this table, in order to get confirmed, had to make promises or commitments about how they’d rule in a case that’s currently pending and likely to make its way to the Supreme Court.”

LIVE: Gorsuch says no one else has any idea how he would rule in Trump travel ban case. https://t.co/qYwBqknKdq pic.twitter.com/yWkDLCtl5K

This was just one of several exchanges on Tuesday in which Gorsuch stressed his nonpartisan treatment of each case he's considered.

“There’s no such thing as a Republican judge or a Democratic judge,” he said. “You want someone who will put politics aside.”