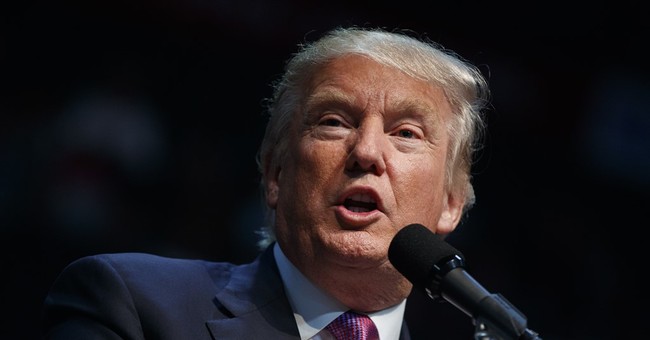 GOP nominee Donald Trump did not give a rally speech Wednesday night in Phoenix, Arizona. He offered a detailed policy speech to the crowd about his immigration policy. Pretty early on, it was evident those media reports about a “softening” of his immigration plan were way off base.

A few hours before his address, Trump met Mexican President Enrique Peña Nieto in Mexico, where the two offered a cordial joint press conference to reporters.

We want to “build a fair relationship between the two countries,” Trump said in Phoenix.

Both countries are going to win as a result of his plan, he said.

“It’s our right to choose immigrants who we think will be most likely to thrive and flourish and love us,” Trump began. American lives have been stolen because our politicians have failed to enforce our laws. Families have been torn apart by sanctuary city policies — some of whom joined Trump onstage following his remarks.

Instead of funneling so much money to illegal immigration, the United States could invest in school vouchers, Trump argued.

“The wellbeing of the American people matters,” he said. “Our greatest compassion must be for our American citizens.”

Hillary Clinton’s immigration plan consists of “open borders and let everyone come in,” Trump said. In contrast, his plan was drafted in part by federal immigration officers, lawmakers who have led on the issue and people who are directly impacted by policies.

Here were some of his main initiatives:

1.     Build a great wall along the southern border. As the crowd chanted “build the wall!,” Trump informed the crowd Mexico will indeed pay for the wall. “100 percent – they don’t know it yet, but they’re going to pay for the wall.” The structure, he said, will be an impenetrable wall on day one. It will be equipped with above and below ground sensors, towers, aerial surveillance and manpower to supplement the wall. They will also use the best technology to find tunnels and keep out cartels. “Mexico will work with us, Trump said. “I absolutely believe it. I really believe they want to solve this problem along with us.”

2.     An end to catch and release. “Anyone who illegally crosses the border will be detained until they are moved out of the country,” he said.

3.     Zero tolerance for criminal aliens. “We will begin moving them out, day one in joint operation with local, state and federal law enforcement,” he explained. “They know who these people are. My first hour in office, those people are gone.”A few other changes Trump will be implementing as president would be to issue detainers for criminal immigrants, pass Kate’s Law to ensure criminal aliens convicted of reentry are taken out, triple the number of ICE deportation officers to target criminals who have evaded justice, just like Hillary Clinton. “Maybe they’ll be able to deport her,” he said.

Trump added that his immigration plan will include a secure Visa tracking system. He will also ask the State Department, Homeland Security and the Department of Justice to begin a comprehensive review to determine if immigration should be suspended from the likes of Syria and Libya.

"There will be no amnesty," Trump concluded.